We bring to you the last part of the extensive, M3 India survey spanning respondents from 3 countries- India, Japan, and US. Here we present a quick comparison of seven countries measured across various parameters like healthcare system, quality of medical care, working environment, doctor income, and medical research as ranked by doctors from India, US, and Japan. 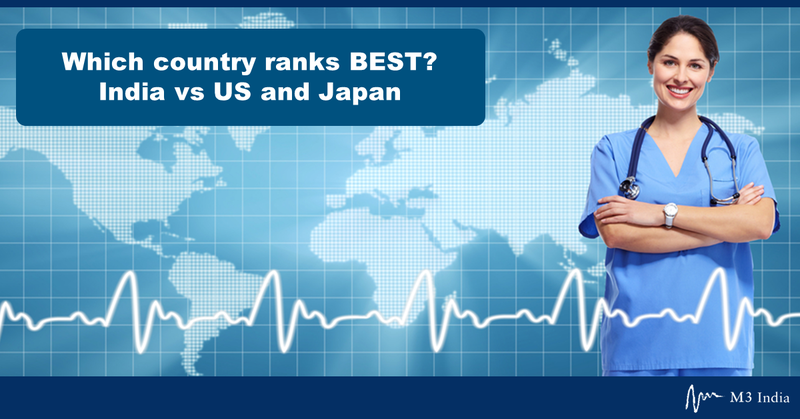 Part 8 of the survey makes it clear that one country stands out across all parameters. Here are the results.

Which country is believed to have a high-performing health care system? * 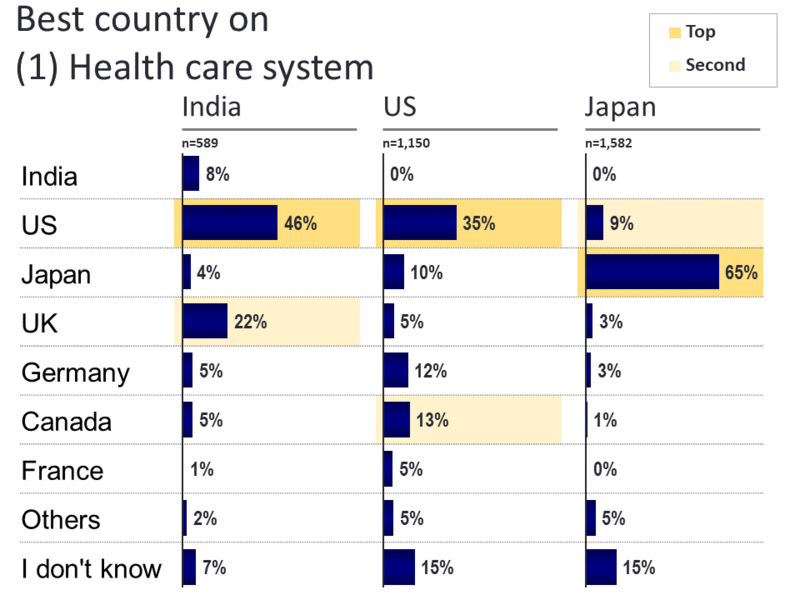 Interestingly a meagre 9% of respondents from Japan chose to respond that the healthcare system of US was the best. Similarly, only 10% American respondents believe that the health care system of Japan is the best. None of the other countries come even close to this ranking for either US or Japan. However, US doctors also ranked Germany (12%) and Canada (13%) as having good healthcare systems.

Which country is believed to deliver best quality of medical care? * 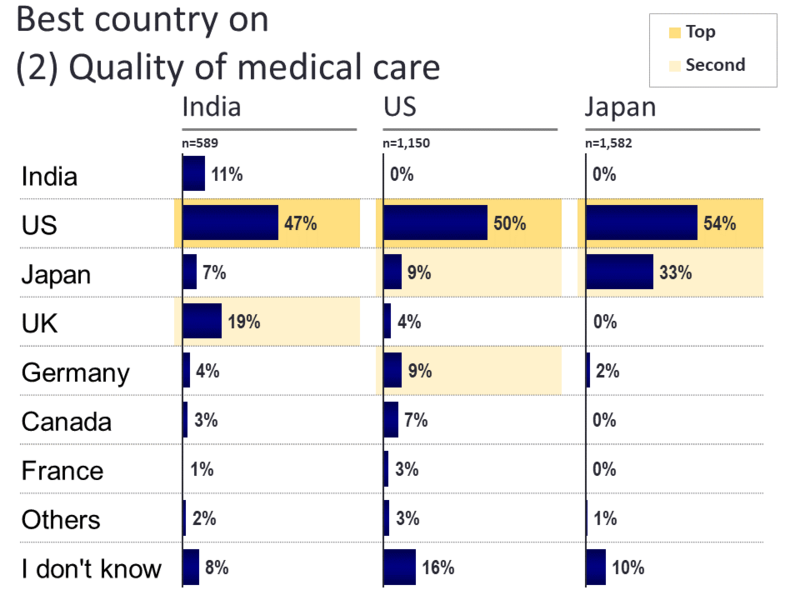 Which country has the best working environment for the physicians? * 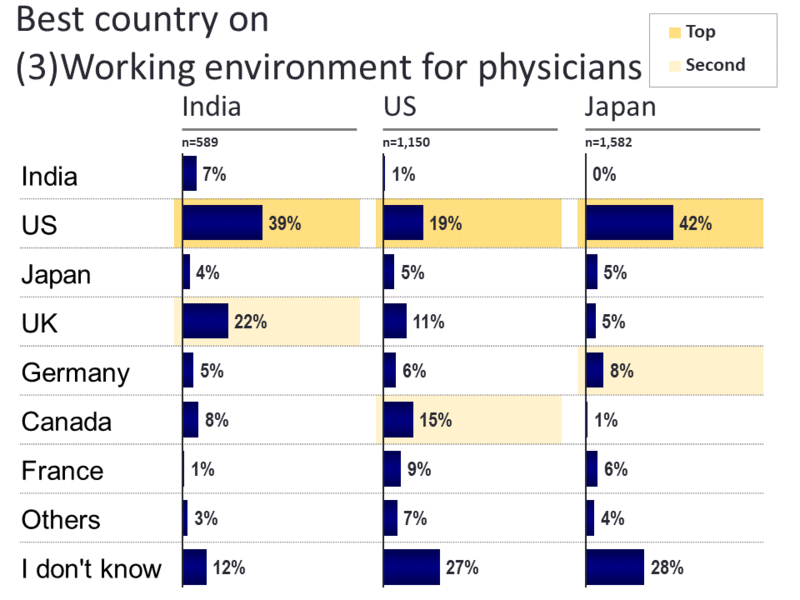 The respondents from the 3 countries were asked to pick a country which they believed to be the best in terms of working environment for doctors. Again, US came out on top, but this time, more Indian doctors (39%) and Japanese (42%) doctors ranked US as the best, the percentages being much higher than US doctors who believed their home country to be the best. Apart from the US, 22% Indian doctors also chose UK to provide the best work environment for doctors. What is also surprising is that 12% of Indian, 27% of US, and 28% of Japanese doctors don’t seem to have an opinion about the country that ranks best for work environment, and therefore there does not seem to be a clear consensus on this parameter.

Which country offers the best salary for physicians? *

Yet again, US seems to top the list with 76% Japanese doctors ranking it as the best country in terms of salary offered to doctors, with 62% Indian and 63% American respondents agreeing to that statement too. 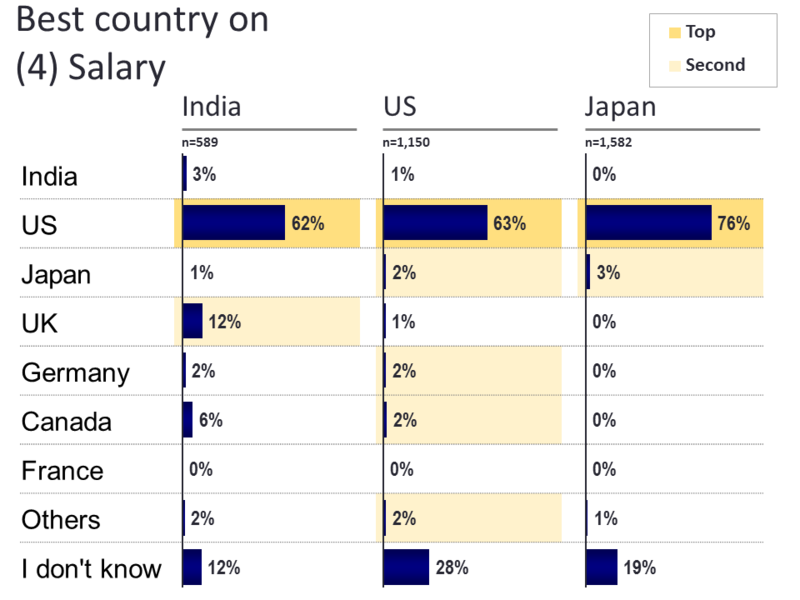 Above 60% of the respondents across all three countries surveyed agree that US offers the most attractive salary packages for doctors. Next on the scale for Indian doctors were UK (12%) and Canada (6%), but these countries fare poorly among US respondents and don’t figure at all in Japan’s ranking list. Only a very negligible percentage (3%) Indian doctors and (3%) Japanese doctors ranked their home countries to be good for salary.

More than half of Indian (62%) and US (64%) doctors, and a whopping 82% Japanese doctors chose US as top for basic medical research. 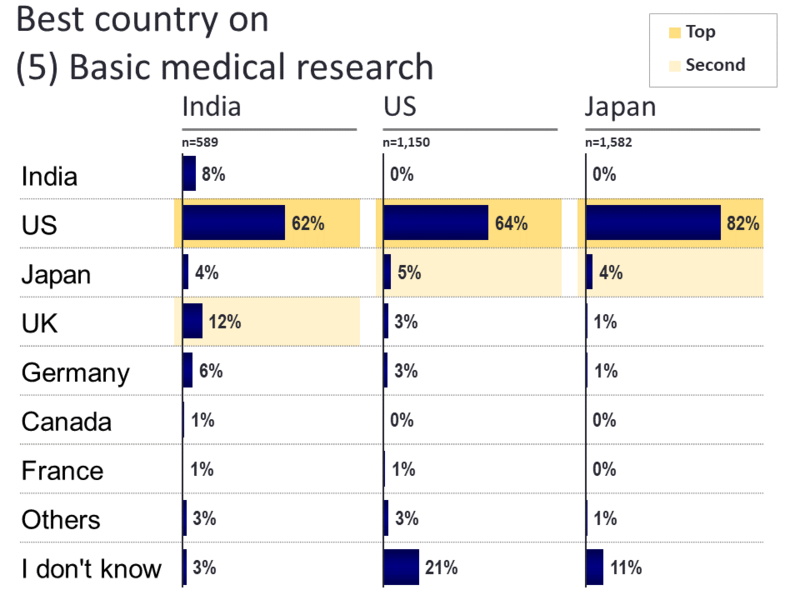 After the US, Indian doctors chose UK (12%), India (8%), and Germany (6%) as best countries for medical research. These countries however did not make any impression in the ranking lists of US and Japanese doctors. Interestingly, 21% US doctors also seemed to be unclear about which country seems to be good in terms of basic medical research.

To read part 1 of the survey, which discusses about work days and work hours for doctors in India, US, and Japan, click here.

To read part 2 of the survey which discusses doctor workload among doctors in India, US, and Japan, click here.

To read part 3 of the survey which discusses professional satisfaction among doctors in India, US, and Japan, click here.

To read part 4 of the survey which discusses about when doctors in India, US, and Japan decide on their career and if they would recommend their professions, click here.

To read part 5 of the survey which investigates how easy or difficult it is for doctors to avail childcare leave in India, US, and Japan, click here.

To read part 6 of the survey which investigates work-life balance of doctors in India, US, and Japan, click here.

To read part 7 of the survey which discusses doctors' views on the healthcare systems in their respective countries- India, US, and Japan, click here.