What do Indian doctors think about 'Digital Patients'?- 518 answer

How do doctors feel when ‘Googling patients’ approach them? M3 India’s recent online survey broached the subject to its members and obtained interesting results and answers! 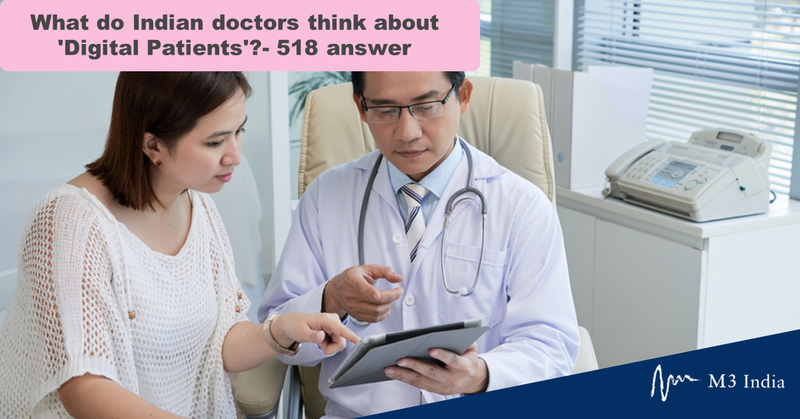 M3 India recently conducted a survey to gather doctors' views on patients who came with medical information obtained online prior to a consultation. Around 70% of the 518 survey participants across all specialities and cities mentioned not feeling challenged or threatened in such situations.

Here is part 1 of the survey results.

With Indians becoming more tech savvy and the Internet being available almost everywhere, it is not surprising to see patients googling for health information.

Doctors reported that on an average 1 out of 4 patients who they treat mention reading about their condition on the internet prior to the consultation.

What comes as a surprise, however, is that the patient behavior does not differ between metro and non-metro cities. Clearly use of internet for obtaining health information is no longer a metro-only phenomenon.

While looking at the split of respondents by broad specialties- Internal medicine vs. Surgical areas, the percentage of patients who checked the Internet for health information was again quite close to average i.e. ~ 25% showing the 1 in 4 ratio seems to be quite a homogeneous trend.

Asked to talk about their individual experiences, several surgeons mentioned that they often come across patients who read about minimally invasive surgeries online who demand that the surgeons follow the same protocol for them as well.

A senior Cardiothoracic surgeon who participated in the survey mentioned, “Patients often demand keyhole surgery irrespective of the condition. Often, the patients ask for procedures that are on trial without adequate follow up of results. When they are advised against a procedure that they may have come to know through the media, they think that the doctor is not up to date or an old timer and move on to another doctor.”

Again, there was no significant difference in these numbers between doctors practicing in metro and non-metro cities. 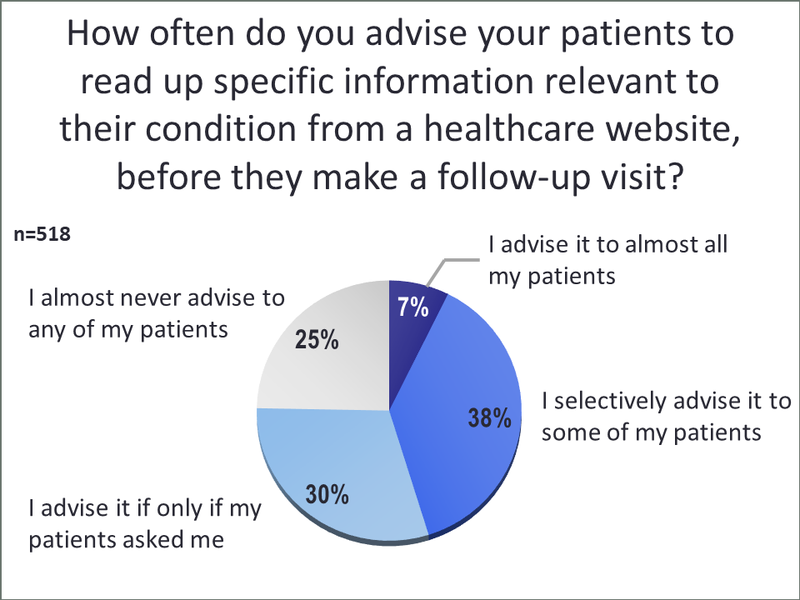 It is interesting to note that doctors are now looking at utilising the internet (Google) as a tool to build trust with their patients and enable better doctor-patient communication.

We asked the doctors if they ever consider utilising the internet for Patient education and we got some interesting answers.

A senior OBGYN recounted the story of how she used Google to her advantage while trying to deliver a breech presentation. “I had a primigravida with twins. The first twin was by breech presentation, so I advised her to go for a planned cesarean section. The family was very reluctant to accept my decision and insisted a normal vaginal delivery. I would have sent her for a second opinion to another doctor but instead I asked her to google. When they read about the complications involved and they knew that I was as right as Mr. Google!”

70% doctors do not mind being questioned by Googling patients*

Doctors said they are open to being contradicted or challenged by their patients based on their reading on the internet.

When patients visit with their own data and information about a disease, doctors seem to handle such situations well by fine-tuning their communication skills, listening to patients more intently, providing reassurance that the patients’ concerns will be addressed. 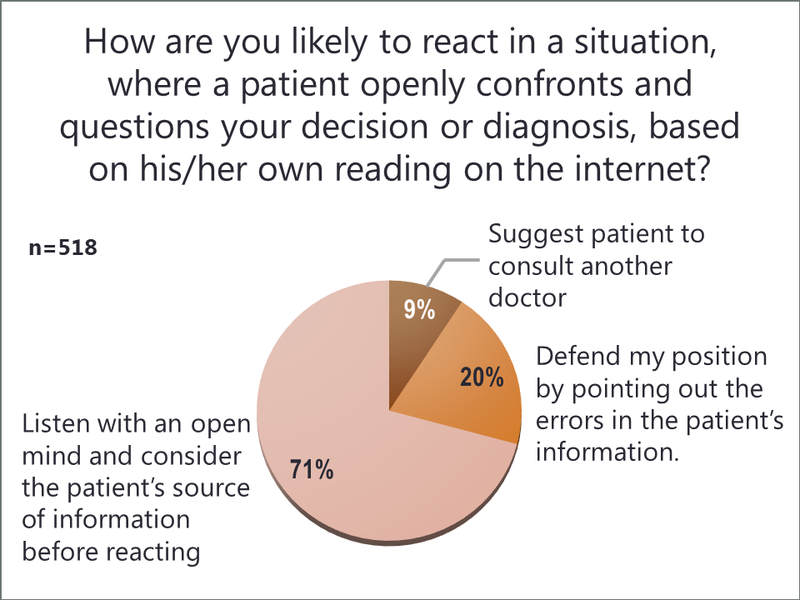 But what do doctors do when they know their patient is misinformed, nevertheless being stubborn?

A few participants provided interesting anecdotes about how they handled such situations.

I tried a rational explanation and it worked!

One of the participants, a senior Endocrinologist mentioned using logic laced with a little sarcasm to make his patient understand that Dr. Google may not always be right. “At times they are misguided by some newspaper publications -- search something else on the internet, and unnecessarily argue that what is available online is fit for them. Then I let them know that their case is different than what they have seen. The treatment is totally individualised and what is available online is a generalised one. I ask them to accompany me on a helicopter mentioning I've learnt piloting online yesterday. Then they realise where they stand!”

My patient was diagnosed with “depression” due to his obsession with Dr. Google!

Another survey participant mentioned that his patient’s obsession with Dr. Google actually led to a surprising diagnosis. He said, “I had a patient who frequently doubted his medications referring to the Internet frequently. I tried in several ways to convince him, and at last I decided to refer him to a Psychiatrist for counselling. He was diagnosed to be a patient of chronic depression, and we treated him effectively after which his health and thought process improved considerably.”

The results of the survey so far provide evidence that most Indian doctors do not view Google as a threat. There are times when Google can seem like a curse in the consultation room, but it is also the age of shared decision making, and doctors know all too well the importance of this and how much it can positively contribute, not just to the quality of healthcare delivered, but also to the growth of their practice.

To read Part 2 of the survey, click Do Indian Doctors see benefits with ‘Digital Patients’?- 518 answer

To read Part 3 of the survey, click What negative behaviours do Indian Doctors associate with 'Digital Patients'?- 518 answer

Disclaimer: We have presented the data and facts as they are without generalizing the results as a reflection of the views of entire Indian doctor population. The demographic profile of the survey participants [shown above] may differ from the population of all Indian Doctors. Also, limiting the sample to the Internet channel only may introduce bias in the results. We also urge that the findings should not be interpreted as implying cause and effect.