The current IDSA guideline updates include recommendations based on new evidence that has become available, recommendations for previously unaddressed populations, ASB screening and treatment in pregnant women and patients undergoing endourological procedures. 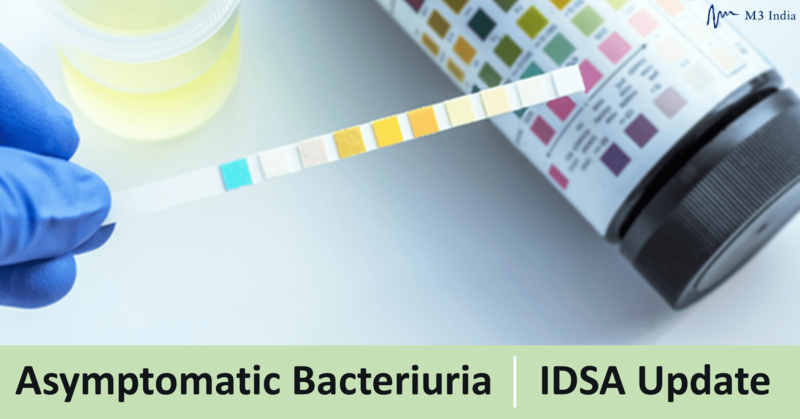 Asymptomatic bacteriuria (ASB) is commonly observed in some healthy female populations and in individuals with genitourinary tract abnormalities that impair voiding.

The update strongly recommends against screening for or treating ASB in infants and children. As per the panel, even though there may be an increased risk of symptomatic urinary tract infection (UTI) in bacteriuric children, there is no evidence that treatment of ASB prevents symptomatic UTI, including pyelonephritis, renal scarring, or renal insufficiency. The panel further adds that there is high-quality evidence which supports the harmful effects of antibiotics and the contributing antimicrobial resistance.

Screening for or treating ASB in healthy premenopausal, nonpregnant women or healthy postmenopausal women is not recommended.

There is no evidence that episodes of symptomatic UTI are attributable to ASB. Furthermore, the treatment of ASB may not decrease the frequency of symptomatic UTI, including pyelonephritis; in fact antibiotic use is associated with an increased risk of subsequent UTI.

For the treatment part, the panel suggest 4–7 days of antimicrobial treatment rather than a shorter duration. The optimal duration of therapy will depend on the antibiotic used; however, the shortest effective course should be used.

Functionally impaired older women or men residing in the community, or in older residents of long-term care facilities

The guideline strongly recommends against screening or treating ASB in older, community-dwelling persons who are functionally impaired.

In the elderly, antibiotic treatment of ASB is less likely to reduce the risk of death or sepsis. Evidence from high quality data suggest increased risk of adverse outcomes such as antimicrobial resistance and Clostridioides difficile infection with the use of antibiotics in the elderly.

Antimicrobial treatment is not recommended in older, functionally or cognitively impaired patient with bacteriuria and delirium and without local genitourinary symptoms or other systemic signs of infection. The guideline suggests assessing other causes and careful observation in such population instead of initiating antimicrobial treatment.

Broad-spectrum antimicrobial therapy targeting both urinary and nonurinary sources is recommended in bacteriuric patient with fever and other systemic signs such as severe infection and without a localizing source.

The guideline recommends against screening for or treating ASB in patients with diabetes. The recommendation is based on the lack of demonstrated benefit and the possible risk of adverse effects that can occur with antimicrobial use in diabetics.

Patients who have received a kidney transplant

Evidence suggests that treatment of ASB in renal transplant recipients >1 month after surgery may not prevent pyelonephritis or graft rejection and may not improve graft function. Hence, the guideline recommends against screening for or treating ASB in this group of patients.

The guideline recommends against screening for or treating ASB in patients with nonrenal solid organ transplant (SOT). Patients with nonrenal solid organ transplant (SOT) are at an increased risk of Clostridioides difficile infection and acquiring antimicrobial-resistant organisms. Additionally, in these patients, symptomatic UTI is not commonly found and adverse consequences of symptomatic UTI are extremely rare; the risk of complications from ASB is, hence, probably negligible.

In patients with high-risk neutropenia (absolute neutrophil count <100 cells/mm3, ≥7 days’ duration following chemotherapy), it is unclear how frequently ASB occurs and how often it progresses to symptomatic UTI.

In patients with low-risk neutropenia (>100 cells/mm3, ≤7 days, clinically stable), there is only a very small risk of infection and there is no evidence which point out that ASB has greater risk than for nonneutropenic populations.

Screening for or treating ASB in patients with spinal cord injury (SCI) is not recommended. The panel suggests the consideration of atypical presentation of UTI in these patients while making decisions with respect to treatment or nontreatment of bacteriuria.

Patients with an indwelling urethral catheter

The guideline also recommends against screening for or treating ASB in patients with a short-term indwelling urethral catheter (<30 days) as well as in patients with long-term indwelling catheters. The panel suggests that antimicrobial prophylaxis at the time of catheter removal may be benefiacial for prevention of symptomatic UTI in some patients.

The guideline recommends against screening for or treating ASB in patients undergoing elective nonurologic surgery.

Patients undergoing invasive endourologic procedures in the presence of bacteriuria are at a greater risk of developing postoperative sepsis. Hence, the guideline recommends screening for and treating ASB prior to surgery in these patients.

The panel recommends that a urine culture should be obtained prior to the procedure in patients who will undergo endoscopic urologic procedures. The use of targeted antimicrobial therapy is suggested rather than empiric therapy.

The panel however, suggest that all patients should receive standard perioperative antimicrobial prophylaxis prior to device implantation.