How doctors are handling the recent Congo fever outbreak in Gujarat

This year, there have been 17 positive cases of  Crimean-Congo Haemorrhagic Fever (CCHF), all of whom are undergoing treatment in various hospitals in the state; the latest being on August 30, when a confirmed case of CCHF was admitted in the Civil Hospital, Asarva in Ahmedabad. 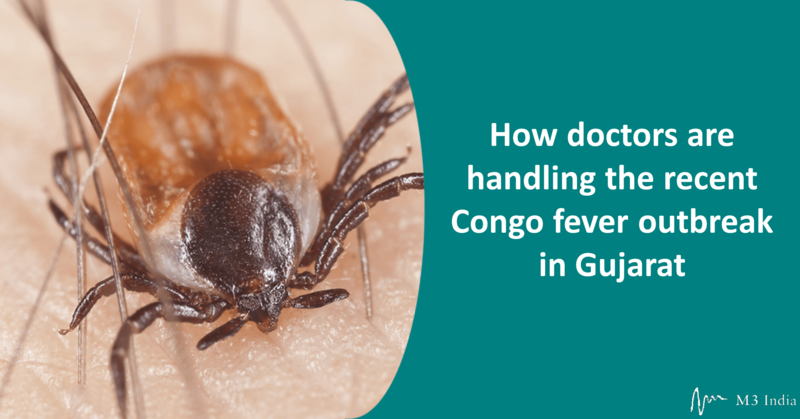 In Gujarat, three people have succumbed to Crimean-Congo Haemorrhagic Fever (CCHF), popularly known as Congo Fever, in a span of just a few days. CCHF is a highly infectious zoonotic disease of humans caused by Hyalomma tick-borne virus (Nairovirus) of the Bunyaviridae family. Animal handlers and veterinarians are among those particularly at high risk of contracting the disease, which causes severe viral haemorrhagic fever and has a fatality rate of 10–40%.

The first confirmed case of Congo Fever in India was reported in 2011 in Gujarat. Since then, eight people have died in the sporadic outbreaks recorded in the state.

Symptoms of the fever are very similar to dengue. According to senior physician Dr. Pravain Garg, “Transmission to human occurs through contact with infected ticks or animal blood. This can be transmitted from one infected human to another through infected blood or body fluids. Symptoms include fever, muscular pain, headache, nausea, skin etc.” The treatment involves administration of the anti-viral drug, Ribavirin and increased intake of fluids. A patient can be cured in a week to 10 days’ time, depending on the individual’s health. But if the patient has multiple organ failure then chances of survival reduce drastically.

This year, there have been 17 positive cases, all of whom are undergoing treatment in various hospitals in the state; the latest being on August 30, when a confirmed case of CCHF was admitted in the Civil Hospital, Asarva in Ahmedabad.

A village in quarantine

The infection so far has been concentrated mainly in Surendranagar district, where two women from Jamdi village have died. The first death occurred at SVP Hospital, Ahmedabad where a 75-year-old woman from Jamdi village was admitted on the early hours of August 20. “She died on the same day around 11.30 pm. We had sent her blood sample to the National Institute of Virology in Pune and they had confirmed Congo Fever as the cause,” said Dr. Bhavin Solanki, medical officer in-charge at the Ahmadabad Municipal Corporation.

Following this, four persons were infected in the hospital, including medical staff who had attended to the patient. All of them are under treatment. “Soon after the confirmation, we informed all district and state health officers as per the national guidelines. Moreover, all the persons in contact with the patient - such as doctors, nurses, laboratory technicians and house-keeping staff - were traced and screened. At present four members are being treated in an isolation ICU and are under observation as they have symptoms similar to that of Congo Fever,” said Dr. Solanki.

Jayanti Ravi, Health Commissioner, had earlier briefed the media that preventive activity is on-going in Jamdi village. More than 700 people have been screened and 21 close contacts of the women who died are under observation. The health department has started OPD within the village and surveillance on 500 cattle has been completed. Insecticides have been sprinkled and a rapid response team is visiting village to conduct awareness drives. Nine samples of serum of cattle and nine tick samples have been sent for laboratory tests.

"In Jamdi village, things are normalising. A second inspection will be conducted after three to four days. Animal behaviour is normal and it seems they are out of danger. The village will be under observation for one more week. We have advised the villagers not to leave the village and a team of medical doctors are deputed there," said Dr. Dinkar Raval, Deputy Director (Epidemic) in the state health department.

The last reported death was from Bhavnagar, where a 25-year-old woman, who was admitted on August 21 around 9 am, died in the afternoon of the following day. Laboratory tests of her blood samples reported positive for CCHF.

On August 30, 65 workers from different factories in Halvad were suspected to be infected by the virus. Prior to this around three laborers from a factory in the area reported being ill, of which two patients’ blood report confirmed positive for CCHF. All of them were admitted to Morbi Civil Hospital and according to a local health official, the labourers have been under observation as a preventive measure. One patient, who was suffering from fever, has died in the hospital. While doctors suspect this might be a case of Congo Fever, confirmation report is awaited. "It is true that a large number of people are under observation. We have tested them for dengue, which turned out to be negative yesterday. Now there is another possibility of them being infected by Congo Fever. We are not denying any possibility. There might be some other viral infection or they may have consumed raw meat. All the patients’ platelet counts have decreased and were found to be below the mark when they were admitted. Another reason could be consumption of alcohol or alcoholic beverages," said Dr. Raval on August 30. As of September 3, all the 65 persons under observation here have tested negative for CCHF, bringing a sigh of relief to healthcare authorities.

The author, Gargi Raval is a Ahmedabad-based freelance writer and a member of 101Reporters.