Independence Day 2019: Stories of physicians from the freedom struggle

Today, India marks its 73rd year of independence. Through the years, we have read and marveled at the stories of how our heroes of the freedom movement overcame the odds and much struggle for the sake of our country. Here, we pick three such prominent people who were not just part of the freedom struggle but also had flourishing careers as physicians. These are their stories. 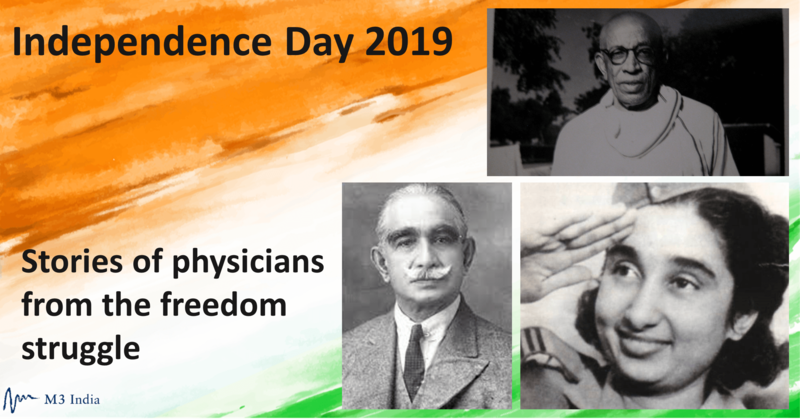 Beside the obvious political activity and contribution to the 1916 Lucknow Pact, his service as AICC General Secretary and President of a major political party, Dr. Mukhtar Ahmad Ansari was a man of science. Born on 25 December, 1880 in Uttar Pradesh, Dr. Ansari completed his medical degree from Madras Medical College, later earning a Master of Surgery (ChM) from the University of Ediburgh for his thesis on Syphillis.

After returning to India in 1910, he served as medical advisor to the princes of Rampur, Alwar, Joara, and Bhopal. During these years, Dr. Ansari was faced with many cases of patients suffering from a real or imaginary decline in physical, mental, and sexual powers. In search of a cure for this and to help some of his patients produce heirs, Dr. Ansari turned to Europe and America, where there were an increasing number of Xenotransplantation cases documented.

In 1921, 1925, and 1932 he traveled to Vienna, Paris, Lucerne, and London to learn from the pioneers in the field of grafting animal testicles onto humans- urologist Dr. Robert Lichtenstern, physiologist and endocrinology expert Eugen Steinach, and surgeon Dr. Serge Voronoff. Dr. Ansari also collected extensive literature on the topic, all of which he brought back to his practice in India. He had a rich patient load, many men who were willing to undergo the regenerative surgery, an option which at the time was only available to the elite in the west.

He conducted 700 such surgeries of testicle grafting in India, 440 of which he made detailed notes of and followed up on each of these patients for three to four years. He later published this as a book, 'Regeneration in Man' which he shared with his dear friend, Mahatma Gandhi.

A woman who made her own rules and led a life that broke stereotypes in the pre-independence era, Dr. Lakshmi Sahgal, was born in Tamil Nadu on October 24, 1914 to a criminal lawyer father and a social worker and independence activist mother. She studied medicine at Madras Medical College, graduating in 1938, and a year later went on to finish a diploma in Obstetrics and Gynaecology, and practice at Government Kasturba Gandhi Hospital.

A failed marriage led her to travel to Singapore in 1940 where she met a few members of Subhas Chandra Bose's India National Army. On hearing about Bose's wish to include women into the organisation, Dr. Sahgal met him with a proposal of setting up a women's only regiment. Many women joined the this, and Dr. Sahgal soon began to be known as Captain Lakshmi. Later, she was arrested by the British army in 1945 and remained there till 1946, after which she returned to India.

Dr. Sahgal married again in 1947 and continued her medical practice in Kanpur until the age of 92. In 2012, she died from a cardiac arrest at the age of 97. Her body was donated to science.

His work in the Indian freedom movement and later, Indian politics may have begun from 1919, but Dr. Rajan's story in medicine dates back to far before that when he enjoyed a lucrative medical career across three countries- Burma, England and India.

After graduating in MBBS from Royapuram Medical School, Madras, Dr. T.S.S. Rajan moved to Rangoon, Burma to practice. He later went to England to pursue his M.R.C.S degree at Middlesex Hospital, London. In 1914, he returned to India and round the same time, became acquainted with an Indian politician, Chakravarti Rajagopalachari (Rajaji) and joined the Indian National Congress. He was later arrested for agitation against the Rowlatt act. Post his release, he set up his own clinic in 1923, called 'Rajan Clinic'.

In the meantime, Dr. T.S.S. Rajan continued to hold various powerful positions, serving as the General Secretary of the Congress, President and later, Secretary of the Tamil Nadu Congress Committee, and President of the Civic, Social, and Welfare League at Trichinopoly.

He was imprisoned once again in 1931 for participating in the Vedaranyam Salt Satyagraha organised by Rajaji and released after 18 months. In 1934, Dr. Rajan was elected to the Imperial Legislative Council of India, but resigned in 1936 owing to differences. He was once again elected in 1937 to the Madras Legislative Council, and in 1946 was appointed as the Minister for Food and Public Health, a position he held until 1951.

Read the stories of three other famous doctors who were part of the freedom movement. Click Independence day special: Doctors who answered the call for freedom