Take the poll: Is it legally right for doctors to be simultaneously registered with SMC and MCI?

Dr. MC Gupta answers a pertinent question on whether Indian doctors should be simultaneously registered with the State Medical Council (SMC) and Medical Council of India (MCI), justifying with an example of a real case, to demonstrate why it is important for doctors to have some basic legal knowledge.

Before you begin, let us know what you think is right. 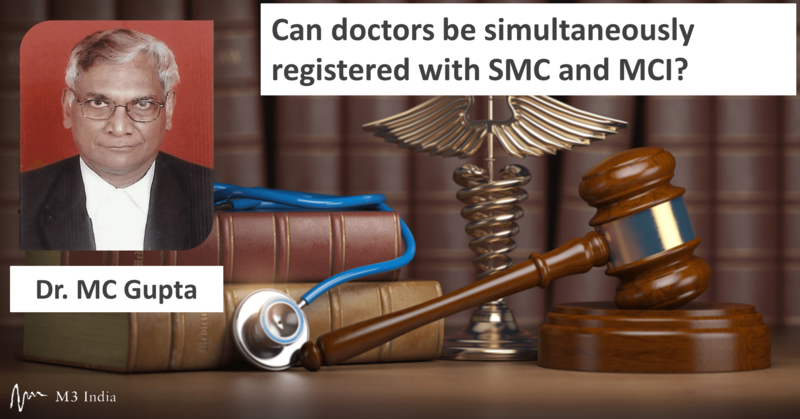 Why is it important for doctors to have some basic legal knowledge?

1--It goes without saying that, by and large, the acts of a professional are guided by his knowledge. If the knowledge is lacking, there are high chances that the acts/behaviour may be faulty.

I joined the bar in the year 2001. During the last 19 years, I have observed that the legal knowledge of doctors is rather deficient. This is despite the fact that, legally speaking, ignorance of law is no excuse. In other words, everybody, including doctors, is supposed to know the basics of law. It is my observation that doctors, who are otherwise highly educated, often display lack of basic knowledge of law and a rational, legal attitude.

2--Let me illustrate my observation with the following examples:

i)—Cut/Commission Practice--I have been asked by doctors whether it is against law to accept cuts/commission for referral to other doctors/hospitals/laboratories/imaging centres. The clear answer is that such practice is illegal. The surprising thing is that doctors should ask such a question at all. All doctors are supposed to have read the Code of Ethics Regulations, 2002. A declaration that they have read the same is given by them in writing before they are registered by the State Medical Council. Hence they are supposed to have read the following regulations:

“6.4.1 A physician shall not give, solicit, or receive nor shall he offer to give solicit or receive, any gift, gratuity, commission or bonus in consideration of or return for the referring, recommending or procuring of any patient for medical, surgical or other treatment. A physician shall not directly or indirectly, participate in or be a party to act of division, transference, assignment, subordination, rebating, splitting or refunding of any fee for medical, surgical or other treatment.

6.4.2 Provisions of para 6.4.1 shall apply with equal force to the referring, recommending or procuring by a physician or any person, specimen or material for diagnostic purposes or other study/work. Nothing in this section, however, shall prohibit payment of salaries by a qualified physician to other duly qualified person rendering medical care under his supervision.”

The very fact that they ask a question about the legality of the Cut/Commission Practice shows that they do not have even the basic legal knowledge that a doctor should have.

ii)—Simultaneous registration with SMC and MCI—There are some doctors who are primarily registered both with the SMC (State Medical Council) and the MCI. This is wrong in principle. The principle involved is that the MCI is an appellate authority if a doctor is aggrieved by the decision of the SMC in a complaint filed against him. The problem that may arise from simultaneous registration with both SMC and MCI is clear from the following example:

“A client of mine, a lady doctor with MD in gyn-obs, conducted delivery but the patient died of PPH. The husband filed a complaint with the Delhi Medical Council as well as with the police. The DMC initiated an inquiry and the doctor submitted her reply to the DMC. The police wrote to MCI for opinion and the MCI, on finding that the doctor was registered with it, initiated its own inquiry and the doctor submitted a reply to the MCI also. The MCI found the doctor guilty and removed her name from the medical register for 2 months. She filed a writ petition against the MCI decision, saying the MCI was only an appellate authority and the inquiry should be held by the DMC. The HC set aside the order of the MCI and directed the DMC to complete the inquiry. The DMC also found her guilty and removed her name from the medical register for 3 months. Then I filed an appeal before the MCI against the DMC order and argued the case on her behalf. The MCI set aside the DMC order, saying there was no negligence on her part.”

The lesson here is that doctors should not get registered with both the SMC and the MCI. Those who are thus registered should get their primary registration with the MCI cancelled. In the case cited above, the doctor should not have sent a reply of defence to the MCI when she got a notice of inquiry from the MCI. She should have simply written to the MCI that the DMC was already conducting an inquiry. The MCI would not have then proceeded with the inquiry. It is obvious that the lady doctor was not aware of the basic legal principles that:

The writer, Dr. MC Gupta is a practising lawyer specialising in medical negligence cases. He also has an MD Medicine from AIIMS, Delhi where he also worked as a faculty member for 18 years, later working another 10 years as a Professor and Dean at National Institute of Health and Family Welfare, New Delhi, before pursuing law.