The ESC Congress 2019 at Paris (31st August to 4th September) came up with multiple important trials, which may change our day-to-day clinical practice. This is an overview of a few of the most important studies presented there, with comments regarding a new ESC Guideline on Lipid Management and a new terminology coined – Chronic Coronary Syndromes. 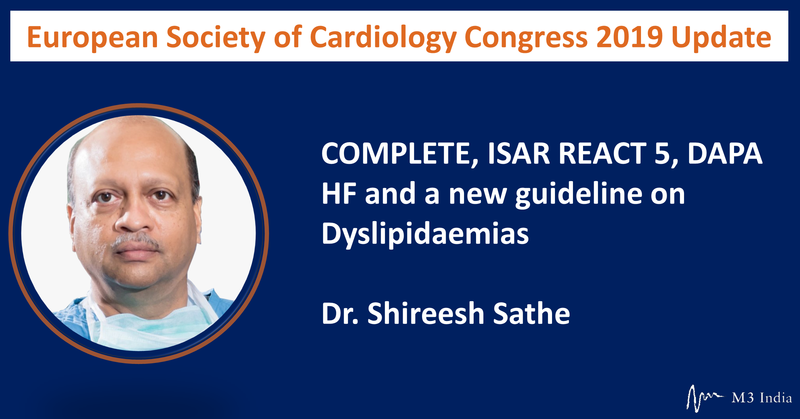 DAPA HF is really a landmark study. SGLT2 inhibitors have by now been shown to have value in preventing Heart Failure in Diabetic patients in 3 large studies (EMPA REG, CANVAS Programme and DECLARE). The DAPA HF study was designed to find their value in established HFrEF patients, with or even without Diabetes Mellitus.

An additional 17% risk reduction of all cause mortality – all in all, a significant reduction in all components of Primary endpoints (number needed to treat was 21). It really is a landmark study, the benefits seen are similar to a large number of previous studies done on HF patients like EMPHASIS HF and PARADIGM HF and the benefits are equally seen even in non-diabetic patients. Even QoL (Quality of Life) is similar, if not better, than seen in the previous studies.

The results of DAPA HF are not totally surprising – there was already a strong HF signal for SGLT2 inhibitors in the EMPA REG, CANVAS and DECLARE studies. Although, that was only in diabetic patients. But this now may change clinical practice - adding another molecule to standard of care for HF in diabetic as well as non-diabetic patients. This means, in all patients with symptomatic HF (Class II-IV) and reduced ejection fraction (less than 40%).

Since the Indian burden of HF is huge (10% of the population) and is rising fast, this molecule will come handy in optimising medical therapy for HF – the device therapy or Heart Transplant being economically out of reach for most of our patients. And the drug is safe – rate of AE is same in both the groups. Cardiologists are still wary of using a diabetic drug with the fear of hypoglycaemia, which is unfounded (except some patients on insulin). Should we then start using DAPAgliflozin in all patients of HF? I think we need to wait till the study is published and discussed, let the drug get regulatory authority approval for HF and let it come in the guidelines as well.

COMPLETE Study (Complete vs. Culprit Only Revascularisation Strategies to Treat Multi-Vessel Diseases after Early PCI for STEMI): Better outcome with PCI in non-culprit lesions after STEMI

Management of non-culprit lesions in a patient with multi-vessel disease and STEMI after Primary Angioplasty is done for the culprit lesion has always been uncertain – whether to routinely address them with PCI or whether to treat them only with guideline-directed medical therapy.

From previous trials like PRAMI, CVLPRIT, DANAMI 3 and COMARE ACUTE, we know that addressing non-culprit lesions significantly reduces softer outcomes like urgent revascularisation but we did not know whether or not it would prevent hard outcomes like CV death and MI and ischemia-driven revascularisation. Basically, because none of the previous trials were adequately powered to detect reductions in these hard clinical outcomes – trial enrolling 250 to 900 patients only – COMPLETE Trial was designed to address this gap in evidence. The COMPLETE Trial enrolled 4041 patients with STEMI who had a successful PRIMARY PCI of culprit lesion and had multi-vessel disease with a non-culprit lesion or lesions of at least 70% or FFR of less than 80.

Patients were then randomised to either address culprit lesions with PCI (complete revascularisation) or no revascularisation (culprit-only group). The staged procedure was either performed before discharge or up to 45 days of index procedure. Both the groups were followed up for a mean period of 3 years.

The benefit was seen regardless of whether the staged procedure was done before discharge or after discharge up to 45 days of index procedure. These are all hard clinical endpoints. This also tells us that even non-culprit lesions are biologically active and can cause harm in the future.

Will this trial change our practice?

No, because probably we are already practicing it!

Will it change the guidelines?

Right now complete revascularisation has class II aB recommendation. I think it should be upgraded at least in those patients who have suitable non-culprit lesions for PCI. The results are published simultaneously online in Sept 1 issue of New England Journal of Medicine.

Parasugrel and Ticagrelor, both have a class I recommendation for 1 year treatment of patients with ACS after PCI. But there is no head-to-head trial of these newer antiplatelet agents. The researchers thought that Ticagrelor will be better than Prasugrel (to form a one-size-fits-all strategy) on the basis of several considerations.

First, pre-treatment with Ticagrelor in PLATO study showed early benefits. On the other hand, Prasugrel pre-treatment in AccoAST study was not beneficial and had increased bleeding. Lastly, TRILOGY ACS trial showed no benefit of Prasugrel over Clopidogrel in patients of ACS (No STEMI) and were on conservative management.

The study was carried out by ISAR group in Munich (ISAR is the name of a river that flows through Munich), which is an investigator Initiated Study coming from a group that has given innovative trials before. Investigators had assumed that the composite endpoint of death, MI or stroke at one year would occur in 10% of Ticagrelor group and 12.9% of Prasugrel group, so they need a sample size of 4000 odd patients to show superiority of Ticagrelor.

These findings, although counterintuitive, seem very clear. The ‘landmark study’ showed that one-size-fits-all treatment strategy with Ticagrelor was inferior to Prasugrel therapy.

It will have significant effects on our clinical practice. Prasugrel is cheaper here (although, generic Ticagrelor is already on the way). It is superior, it's a once a day drug and last, but not the least, it is not going to be harmful in the majority of the patients.

A few new guidelines were presented at ESC Congress 2019- one of them being the Guideline for the Management of Dyslipidaemias. The last lipid Guidelines from ESC came in 2016.

American as well as the European guidelines, over the last few years, have recommended ‘lower is better’ but the new guideline’s key strategy is ‘even lower is better’ in some subsets of patients. The very high-risk patients are recommended an LDL target of less than 55% and the highest-risk patients (patients with recurrent coronary events in recent times), an even lower target of less than 40 mg% LDL levels.

One major change in the new guideline is the removal of the distinction between primary and secondary prevention – the risk is calculated the same way in both settings.

The problem in India is about risk stratification score. Many risk assessment systems are available. Ideally, risk charts should be based on country-specific cohort data and we don’t have a reliable one for India.

Persons with documented ASCVD, DM, very high level of individual risk factors or CKD, are at very high CV risk. For others, we do need a reliable risk estimation system, which estimates a 10-year cumulative risk of CV death.

All in all, the 2019 ESC Congress came up with some landmark trials and a few important guidelines, which can be implemented by us in our clinical practice.

The author, Dr. Shireesh Sathe is a Senior Consultant in Cardiology from Pune.