How should doctors identify Alzheimer's disease and what steps should they take? Dr. Ganapathy Krishnan 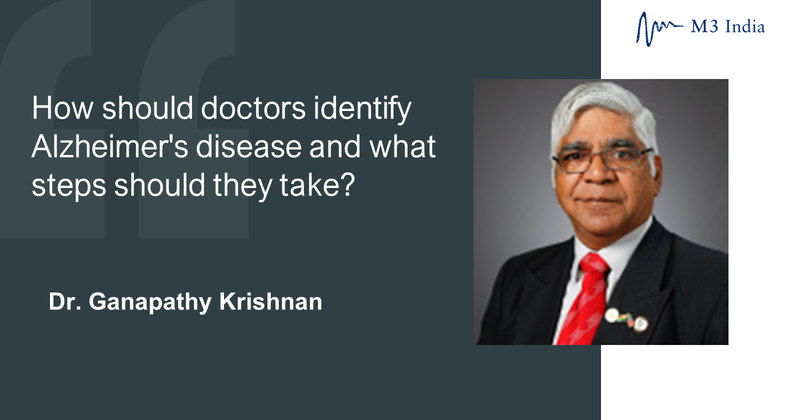 With increasing longevity, Alzheimer’s Disease is here to stay. The diagnosis of AD should be made only after excluding other treatable reversible causes producing Dementia.

Joining support groups, educating and looking after the health of the caregiver is as important as symptomatic treatment of the patient. Notwithstanding the hype in the media of new generation drugs for treatment of AD we have a long way to go before there is concrete scientific evidence that pharmacological manipulation will reverse the disease process per se.

The term “Alzheimer” is so commonly (mis)used by the general public for any form of progressive forgetfulness, that it is often overlooked that AD is only one specific type of dementia (a progressive generalized reduction in normal brain functions) though it constitutes almost 80% of all dementias.

Eminently treatable conditions which cause reversible dementia, particularly in the elderly include chronic subdural hematoma, normal pressure hydrocephalus, cerebral tumours (benign and malignant). Vascular dementia may have a better quality of survival than AD.

It is hence, essential that all treatable forms of dementia must be excluded before labelling an individual with AD. Though AD is more common after age of 65 it can occur earlier. Moreover, AD may also co-exist with Parkinsonism and other medical conditions. One needs to remember that 15 to 20% of individuals with symptoms and signs resembling that of AD, may have other causes for the dementia.

Confirming a diagnosis of Alzheimer's disease

Diagnosis of AD is essentially clinical and is entertained only if there is a progressive, very gradual decline of cognitive and behavioural responses. Symptoms are never acute in onset. And, surrogate biomarkers including sophisticated neuroimaging are at the best, complementary.

An individual can also have more than one type of dementia. Forgetfulness affecting day-to-day tasks, problems in communicating, misplacing things, difficulty planning or solving problems, withdrawal from work or social activities, poor or decreased judgement, confusion with reference to time and place, changes in personality, changes in mood or behavior are all traits of AD.

This continuous progressive decline in thinking, behavioural and social skills ultimately disrupts a person's ability to function independently. Initially a person with AD may be aware that he/she has difficulty in remembering things and organising thoughts. A family member or friend may be more likely to notice how the symptoms worsen.

Occasional memory lapses are not uncommon particularly after age of 65. It is not abnormal to misplace keys or forget the name of an acquaintance. However, memory loss associated with AD persists and worsens, interfering with ADL (Activities of Daily Life).

Repeating statements and questions over and over, forgetting conversations, appointments or events, and not remembering them later, always misplacing possessions and placing them in illogical locations, getting lost in familiar places, eventually forgetting names of family members and everyday objects, having trouble finding the right words to identify common objects, expressing thoughts or to take part in conversations almost always indicate AD.

Changes in personality and behavior could result in depression, apathy, social withdrawal, mood swings, distrust in others, irritability and aggressiveness, changes in sleeping habits, wandering, loss of inhibition and delusions.

Once-routine activities that require sequential steps, such as planning and cooking a meal or playing a favorite game, become a struggle as the disease progresses.

Eventually, people with advanced AD forget how to perform basic tasks such as dressing and bathing.

Many skills are preserved for longer periods while other symptoms worsen. These include reading or listening to books or music, telling stories and reminiscing, singing, dancing, drawing or doing crafts.

Individuals with AD usually live for four to eight years after diagnosis, but some live as long as 20 years.

Investigations to order for AD

There is no conclusive scientific evidence at present to show that pharmacological manipulation in the form of drugs will reduce symptoms or slow the rate of decline.

Emphasis should be to customize programs and services that will help support individuals with AD. Education of caregivers is critical. Looking after their physical and mental health is equally important.

A person with Alzheimer's will eventually need full-time assistance. Support groups and services can be of assistance. One should always remember to manage other co-existing conditions e.g. Diabetes, hypertension, Parkinsonism etc.

This article was originally published on February 19, 2019.

The writer, Dr. Ganapathy Krishnan is a Emeritus Professor of Neurosurgery and the Past President of Neurological Society of India and Indian Society for Stereotactic & Functional Neurosurgery.