Can a doctor be found guilty of workplace insubordination?: Dr. Purvish Parikh

Dr. Purvish Parikh answers questions on workplace insubordination, under what circumstances doctors can be found guilty, and how it can affect their career and future work prospects. 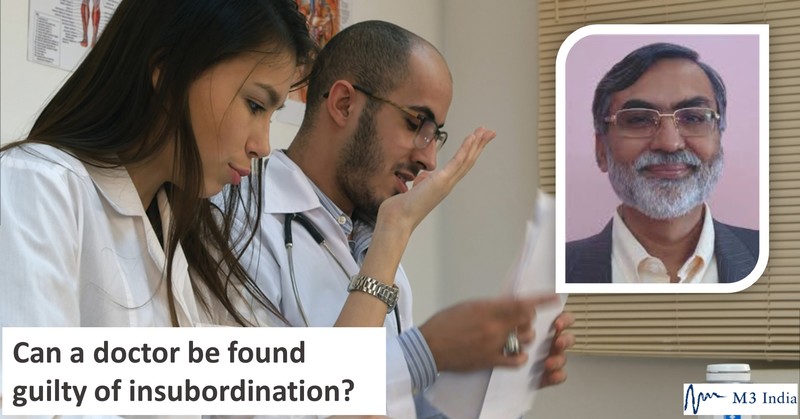 Recently, Asheen Phansey, an American Professor of Indian origin was fired by Babson College, Boston for posting a Facebook joke pertaining to Iran’s bombing of US sites in Iraq. He had, of course, apologised for his sloppy humour– which was interpreted as a threat. But that happened in USA. Can such a thing happen in India?

Like other people, healthcare professionals are also expected to be polite to everyone. Registered medical practitioners have to also comply with the Indian Medical Council (Professional conduct, Etiquette and Ethics) Regulations, 2002.

In a public state government hospital of NCR, a newly appointed assistant professor was found to have shouted and misbehaved with his head of department. This was not an isolated incident. It was followed by several other instances of misbehaviour, insulting insinuations and even physical threat.

The complaint reached the hospital administration, who conducted an inquiry, found the junior guilty, issued a show cause notice and extended his probation period. When this did not prevent him from continuing harassment, additional security was provided to the aggrieved senior colleague while working inside the institute. Subsequently, a police complaint was filed and the matter went to the judicial courts.

The junior doctor was found guilty and an order was passed against him under the Indian CrPC. This was reconfirmed by the additional sessions’ court as well as the Delhi high court.

Adverse notings were made in the internal performance review of the employed junior doctor, which now formed a permanent part of his service records and has important implications on his future career prospects. Additionally being found guilty of criminal charges, dims his ability to find gainful employment anywhere as well as could prevent him from obtaining visa to travel abroad.

Hence, it is very important for doctors to understand the meaning of insubordination and misconduct.

Insubordination can be defined as wilful failure to obey instructions of seniors – provided the act required to be done is ethical, legal and within the terms of the job description.

Insubordination can take varying hues from rudeness to insolence to even wilful/deliberate challenge to authority.

It can be proven if the following criteria are met:

Gross insubordination has serious criminal implications, including under section 144 of CrPC. Other provisions that may also be applicable in specific circumstances include:

In conclusion, misconduct/insubordination at the workplace could be a serious offence and can lead to damaging long term consequences for the perpetrator both within and outside the institution. Doctors need to be aware of these facts to ensure they are neither accused of such an offence nor are they a silent victim of such a crime.