We’re all familiar with the usual signs and symptoms of the cold and flu: sniffling, sneezing, coughing, headache, and the occasional mild fever. Although coming down with these illnesses can be a miserable experience, most people will recover with few complications. However, this will not be the case for everyone. Here are five surprising but severe health complications that can arise from a seemingly minor head cold or case of the flu. 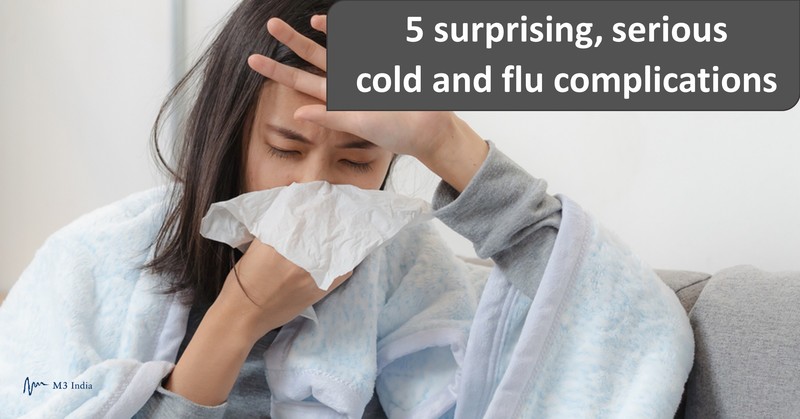 Guillain-Barré syndrome (GBS) is an autoimmune disorder—which can be a complication of a serious case of the cold or flu—in which the body's immune system attacks and destroys its nerves. As a result, muscle weakness and even paralysis can occur. Although the causes of the syndrome are unknown, some experts believe that it is triggered by bacterial or viral infection. GBS usually manifests 1-3 weeks after a viral infection, such as the cold or flu, but it may also occur following bacterial infection with Campylobacter.

Symptoms of GBS include tingling or prickling sensations in the fingers and toes, difficulty walking steadily, severe lower back pain, and muscle weakness in the legs that travel to the upper body. Although uncommon, the syndrome can have devastating health effects, including paralysis—which may be partial, temporary, or permanent—and death.

When one has a head cold or the flu, congestion can cause fluid buildup in your sinuses and ears, resulting in muffled hearing, otherwise known as conductive hearing loss. People with this type of hearing loss mainly have difficulty with the overall loudness of sounds, but not the clarity. They may find themselves turning up the volume on the TV to improve their ability to hear.

Conductive hearing loss is the most common type of hearing loss during a cold or the flu, but it’s usually temporary, lasting a few days to a few weeks. However, in some cases, congestion can lead to infection. If not treated with antibiotics, longstanding bacterial infectious fluid buildup can, in rare instances, cause permanent, sensorineural hearing loss.

Individuals with this type of hearing loss have difficulty with both the loudness and clarity of sounds. They may have problems following a conversation with two or more people speaking simultaneously or in quick succession, and may often experience a feeling of being off-balance or dizzy.

Currently, there is no surgical method to repair the auditory nerve or inner ear cells that may be damaged with sensorineural hearing loss. However, the condition can be managed with hearing aids or cochlear implants. Of note, viral infections can also contribute to sudden sensorineural hearing loss, where inflammation disrupts blood supply to the ear. Physicians should be consulted within 48 hours of sudden hearing loss for initiation of steroid treatment.

Although rare, encephalitis can manifest as a result of the common cold. The most common cause of encephalitis is viral infection, namely enterovirus.

Symptoms of the disease can range from mild headache to severe neurological complications, such as memory loss, seizures, and deafness. Encephalitis is rarely life-threatening, but it’s difficult to predict how the disease will affect each person.

Left untreated, encephalitis can cause grave injury to the brain, resulting in coma or death. Thus, timely diagnosis and treatment are key to positive outcomes, notes the Mayo Clinic. Treatment usually involves anti-inflammatory drugs for mild encephalitis, antiviral drugs for cases with viral etiology, and supportive care for severe encephalitis.

Blindness can occur as a result of acute necrotising encephalopathy (ANE) secondary to viral infections, among which influenza types A and B are the most common. ANE is a rare type of encephalopathy characterised by multiple bilateral brain lesions that can progress to brain damage and brain death. Because ANE is so rare, few clinical studies have offered insight into the disease and, more importantly, its treatment.

While most people recover from the cold or flu without complications, some will develop meningitis. In people with weakened immune systems, such as those recovering from a cold or the flu, the infection can sometimes spread to the brain and cause meningitis. In 2018, there were 330 cases of meningococcal disease reported, according to the CDC.

Symptoms of early meningitis can mimic the flu and appear mild in severity, including headache with nausea or vomiting, lack of appetite or thirst, and sensitivity to light. However, sudden high fever, seizures, and severe headache can be signs of more severe disease.

Viral meningitis is caused by enteroviruses. However, herpes simplex virus, HIV, and West Nile virus can also cause viral meningitis. Viral meningitis is usually mild and will usually resolve on its own. Supportive treatment includes bed rest, fluid intake to prevent dehydration, and over-the-counter pain meds for fever and body aches.

The best ways to protect oneself and others from these cold- and flu-related health complications are to get vaccines and to practice proper hygiene. Remember to wash your hands often with soap and water, especially before and after seeing patients. Avoid direct contact with those who have a cold or the flu, and sanitise frequently used surfaces with a virus-killing disinfectant.

This story is contributed by Melissa Sammy and is a part of our Global Content Initiative, where we feature selected stories from our Global network which we believe would be most useful and informative to our doctor members.