The most comprehensive analysis of long term risk for cardiovascular disease related to non-high-density lipoprotein (non-HDL) cholesterol published in the journal The Lancet (December 2, 2019) suggests a link between cholesterol levels and risk of heart disease and stroke. The study covered almost 400,000 people from 19 countries who were followed for up to 43.5 years (median 13.5 years follow-up) between1970 to 2013. The most notable value of this study is their long- term follow up. 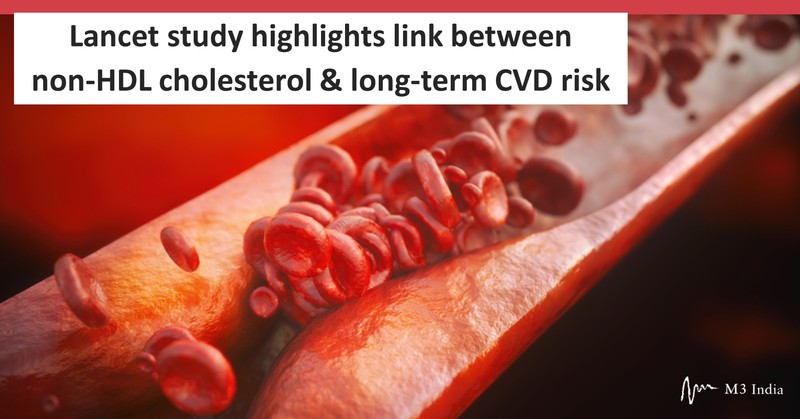 Researchers noted that this long-term evidence may be particularly important in people aged less than 45 years. Depending on cholesterol level and number of cardiovascular risk factors, men and women aged less than 45 years have a 12 to 43% or 6 to 24% risk (respectively) of having fatal or non-fatal heart disease or stroke by the age of 75.

Aim of the study

In a press release, Professor Barbara Thorand, German Research Center for Environmental Health, Germany and a co-author suggested that this increased risk in younger people could be due to the longer exposure to harmful lipids in the blood.

The authors say that intervening early and intensively to reduce non-HDL cholesterol levels during the lifespan could potentially reverse early signs of atherosclerosis. They conceded that there is considerable uncertainty about the extent to which slightly increased or apparently normal cholesterol levels affect lifetime cardiovascular risk, and about which levels should be used to make treatment recommendations, particularly in young people.

The investigators collected data of 400,000 people from 38 studies across Europe, Australia and North America They had no cardiovascular disease to begin with. They were followed up for 43.5 years (50% percent had a follow up period of 13.5 years) for the occurrence of a fatal or non-fatal coronary heart disease event or stroke.

The risk factors considered were smoking status, diabetes, BMI, systolic blood pressure, and antihypertensive medication. The model also estimated how much risk could be reduced if non-HDL cholesterol levels were halved (the authors note that the 50% reduction was hypothetical and not based on specific estimates or treatments).

During follow-up period, there were 54,542 fatal or non-fatal cases of heart disease and stroke.

While reviewing the data for all age groups and both sexes, the investigators found that the risk for a cardiovascular event decreased continuously with decreasing non-HDL levels and the risk was lowest for those individuals with the lowest non-HDL levels (classified as below 2.6 mmol/l or 100.5 mg/dl non-HDL cholesterol in the study).

Using the model to estimate the risk of a cardiovascular event by the age of 75 years for different age groups, the authors found the highest long-term risks of cardiovascular disease in individuals younger than 45 years of age.

Limitations of the study

In a press release from the Science Media Centre, UK, Professor Colin Baigent, Director of the MRC Population Health Research Unit, and Professor of Epidemiology, Clinical Trial Service Unit & Epidemiological Studies Unit, University of Oxford, stated that this is an important paper because it shows what could be achieved if, starting early in their 40s, healthy people were to start taking a statin so that their bad cholesterol is halved for the rest of their lives.

It shows that, if they did this, their risk of having a heart attack or stroke by the time they are 75 would fall dramatically, and the earlier they start the larger the reduction in risk would be. The benefit of taking a statin to achieve a 50% reduction in bad cholesterol would be very much greater than any modest reduction in cholesterol that can be achieved by dietary change and that is why the impact of taking a statin lifelong would add substantially to healthy eating on its own.

It is difficult to predict how long it will take for the peers and the learned societies to accept the conclusions from this study.

Dr K S Parthasarathy is a freelance science journalist and a former Secretary of the Atomic Energy Regulatory Board. He is available at ksparth@yahoo.co.uk