Dr. Jothydev Kesavadev writes on continuous glucose monitoring (CGM) system which has in recent times, become an important part of disease management in diabetes patients. In this article, he focuses on classification of CGM with merits and demerits of the system. 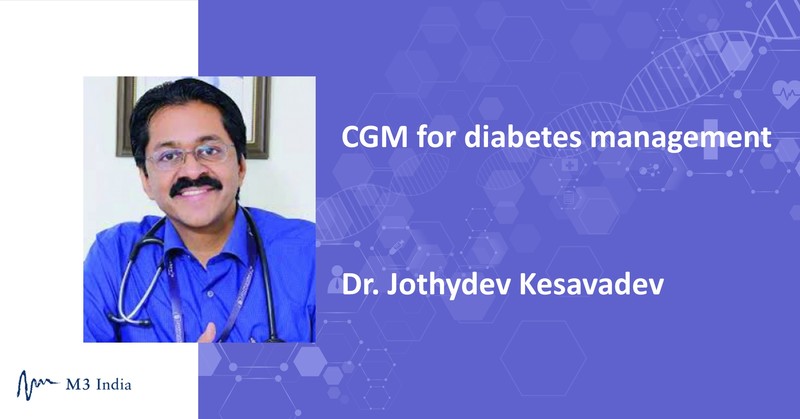 The global incidence; the pace of change in prevalence and mortality rates of diabetes has increased tremendously in recent times  owing to our transition towards a sedentary lifestyle. Diabetes described as a group of metabolic disorders develops when the blood glucose (BG) level is out of whack over a long period. Hence, glucose monitoring plays a pivotal role in diabetes management and prevention.

Thus, in the mid-­1970s, a novel concept termed as Continuous Glucose Monitoring (CGM) was developed as a better alternative to glucose meter which aids healthcare providers and patients to identify and manage the glucose level. [1] Gradually CGM was broadly heralded as a great advance and ADA has established Time In Range (TIR) as one of the goals in 2020.

CGM is a method of using a small sensor inserted into the subcutaneous tissue to measure the interstitial blood glucose (ISF) levels. In its introduction, various studies were conducted in many parts of the world, including India, to assess its potential benefits over glucose meter.

Hence, with the mounting evidence reported from the various studies on CGM, it can be considered as a better choice for glucose monitoring compared to a conventional glucose meter.

For clinical practices, two modalities are there for CGM:

P­CGM is designed exclusively for diabetes healthcare providers. It is not possible to retrieve the real-time readings from a P-CGM but can download the data from the recorded readings. The patients were supposed to wear the device for a suggested period and return to the healthcare team for further analysis of glucose profile along with backdated data. The Continuous Glucose Monitor System (CGMS) or CGMS Gold is the first P˗CGM introduced by Medtronic MiniMed which got FDA approval in June 1999. [4] FSLP is another example of a widely used P-CGM (Figure 1).

RT˗CGM includes patient-owned devices that allow a small sensor to be placed subcutaneously to send glucose readings wirelessly, which can be viewed on a separate receiver device in real-time and continuously. This real-time data offers more knowledge about the current glucose concentration, its trend, and enables patients and healthcare providers to prevent undesirable glucose excursions. Predictive alarms are also available in some versions of the RT-CGM which alerts patients when they cross the recommended glucose targets. Examples of RT˗CGM include Eversense, Guardian Connect (Figure 2), and FreeStyle Libre 2 (Figure 3). 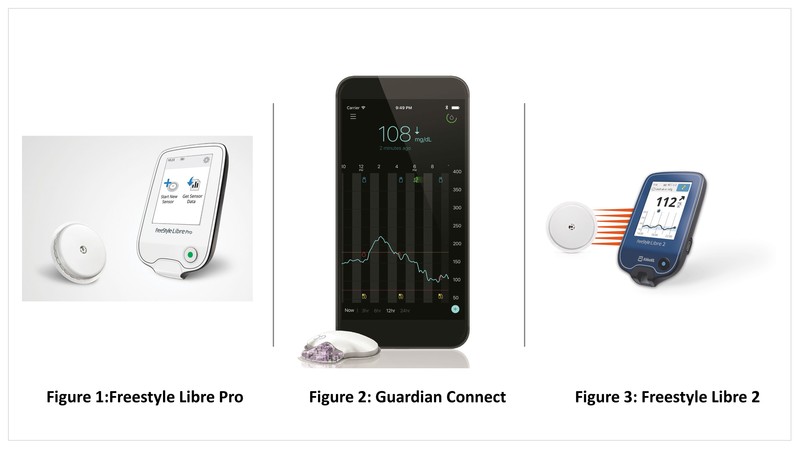 isCGM provides a continuous stream of glucose data to the user but requires an intentional sensor scan by the user to retrieve the information. The FreeStyle Libre Flash Glucose Monitoring System from Abbott Diabetes Care falls under this category. The FreeStyle Libre system employs two components: a combined glucose sensor and a separate touch-screen reader device. When the reader device is swiped nearby to the sensor, the sensor transmits a glucose level, the direction and velocity of changing glucose as well as an eight hour trend graph to the reader. If more than eight hour pass between scans, only the most recent eight hour of data will be retained and available to the user for review.

iCGM can integrate with other compatible medical devices such as automated insulin dosing systems, insulin pumps, blood glucose meters, or other electronic devices used for diabetes management. The ability of iCGM to operate with its compatible devices grants patients the flexibility to tailor diabetes management tools of their preferences to keep glucose levels within the permissible range. Dexcom G6, from Dexcom, the first interoperable CGM to get the designation is a typical example of an iCGM.

A typical CGM consists of the following three basic parts:

The working principle of CGM is that the glucose oxidase-based sensor oxidises the interstitial fluid glucose (ISF glucose) and generates an electrical current. This electrical current carries the data regarding the ISF glucose level of a CGM user. The generated data is filtered and cleared from background noise by the transmitter. The transmitter delivers the data to the receiver which provides an approximation of the BG level, its trend, and history.

There is observed a time lag in the measurement and display of results with CGM. This time lag can be due to two factors:

The concept of Ambulatory Glucose Profile (AGP) was the brainchild of Dr. Roger Mazze from USA who first put forward the idea by interpreting glucose data in 1987. The AGP is a visual report that collates and converts all of the readings obtained from CGM into a waveform. While the waveform will start to develop after 5 days of data collection, 14 days of data collection has been considered ideal to reflect glucose control. This makes interpreting blood glucose levels much easier for both trained and untrained users.

Merits and Demerits of CGM

The merits and demerits of CGM are described in the following table.

Table1. Table shows the merits and demerits of CGM

CGM serves as an excellent tool for the appropriate management of glucose levels in patients with diabetes and will definitely replace glucose meters in the future. But for the next five to ten years, the device will remain as a better alternative to complement glucose meter. However, the use of CGM technology and CGM data interpretation requires extra effort and training for the diabetes healthcare team. But if incorporated in routine diabetes care, it will have a remarkable impact on improving its outcomes.

The author, Dr. Jothydev Kesavadev is an acclaimed Diabetologist, and Chariman and Managing Director at Jothydev's Diabetes Research Centre, Kerala.