Dr. SK Wangnoo and Dr. D Sahu, as part of an exclusive Endocrinology series, expatiate on Polycystic Ovary Syndrome (PCOS) and share their expert commentary on the long-term management of the condition. 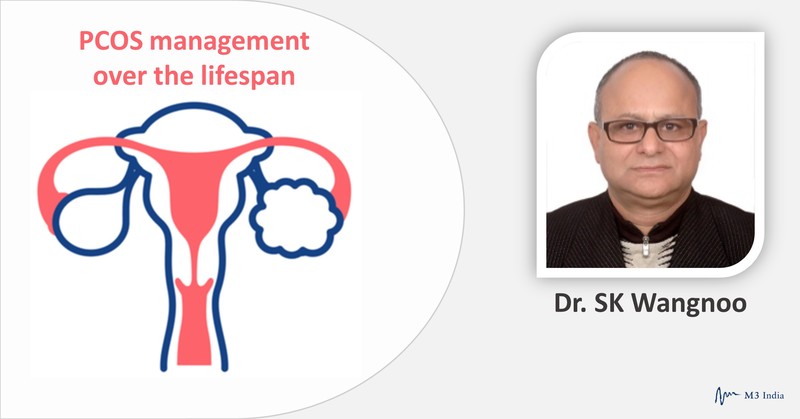 Polycystic ovary syndrome (PCOS) was first described by Stein and Leventhal in 1935 as a gynaecological disorder. It is however, a complex endocrinopathy in women of reproductive age group owing to its association with multiple metabolic comorbidities. It is usually characterised by a gamut of conditions i.e., hyperandrogenism, anovulation, menstrual irregularities, insulin resistance and/or the presence of multiple ovarian cysts. High incidence (42-73%) of spontaneous abortions in PCOS women has also been reported. These multiple endocrinopathies associated with PCOS, not only impose a financial burden on the individual patient but also drains the public health resources, more so in India which has a higher population of young women.

Although, there is no solitary criterion for the diagnosis of this syndrome, it is diagnosed based on a combination of the results of clinical, laboratory, and ovarian morphology in ultrasound. The clinicians have enumerated various criteria for diagnosis including NIH (1990), Rotterdam (2003) and AE-PCOS criteria; the Rotterdam criteria however, has been found to be more inclusive and is generally preferred.

The clinical manifestations of PCOS include oligomenorrhoea, hirsutism, excessive acne, and hair loss. In adolescence, it also causes significant psychiatric disturbances such as anxiety and depression.

PCOS is the leading cause of anovulatory infertility in women. The metabolic consequences include impaired glucose tolerance, type 2 diabetes, obesity and increased risk of cardiovascular diseases. Metabolic complications and increased cardiovascular morbidity were found to be more in the classic PCOS compared to other phenotypes, even after adjustment for obesity. Hyperandrogenic phenotypes of PCOS were found to be more prone to metabolic complications as compared to the phenotypes with normal androgen levels.

Clinicians now have three sets of criteria to choose from, though the Rotterdam criteria are found to be preferred.

According to the Rotterdam criteria, a diagnosis of PCOS can be made in the presence of at least two out of the following three abnormalities: hyperandrogenaemia/hyperandrogenism, oligo-anovulation, and PCO morphology on ultrasound.

Further, the patients need to be evaluated to rule out conditions that mimic PCOS and to detect and treat the long-term metabolic complications. It is extremely important that clinicians remain cognizant of other possible underlying pathologies such as thyroid dysfunction, elevated prolactin, hypercortisolaemia, and other causes of virilisation, which may result in a similar clinical presentation. Generally this work up includes: 17-hydroxyprogesterone (17-OHP), androstenedione, free thyroxine (FT4), thyroid-stimulating hormone (TSH), leutinising hormone (LH), follicle-stimulating hormone (FSH), and prolactin.

Shortcomings of the PCOS diagnostic criteria

PCOS occurs in both obese and non-obese women equally, although markers of IR are more common in obese women.

The prevalence of abnormal glucose tolerance detected by oral glucose tolerance test (OGTT) was found to be high (around 35%) in a large number of young Indian women with PCOS. Studies have consistently demonstrated the relationship between the well-known manifestation of hyperandrogenism among Indian PCOS women and the metabolic morbidities including insulin resistance (IR), glucose intolerance and cardiovascular risk in this population.

Management of PCOS- As complex as the condition itself

The management and treatment of PCOS include a healthy diet, regular physical activity, and medications, which address the associated manifestations and co-morbidities. PCOS management strategies mainly aim at resolving the four major components of PCOS including regularity of menstrual cycle, control of hyperandrogenism (acne and hirsutism), management of infertility and insulin resistance (IR) along with its associated risk factors (type 2 diabetes mellitus, hyperlipidaemia, and obesity). Both non-pharmacological and pharmacological management strategies are important in the overall management of PCOS.

Exercise therapy alone or in combination with dietary interventions should be advised for the management of weight gain and obesity. It can also lead to improvement in cardiovascular risk factors. Thirty minutes per day of moderate to vigorous physical activity leads to reduction in the risk of diabetes and metabolic syndrome. Though randomised clinical trials for the effect of exercise in PCOS are lacking, sustained weight loss, as little as 5%, has been associated with improvement in hyperandrogenaemia and metabolic parameters in obese women with PCOS.

In a randomised, single-blinded, dose-comparison study, Bhattacharya et al. [1] reported that OCP containing 20 μg ethinyl estradiol (EE) with drospirenone had similar effects on free androgen index in PCOS women as that containing 30 μg EE with drospirenone. However, it is important to screen women for the presence of any contraindications for therapy with HCs such as smoking, high blood pressure, or uncontrolled diabetes mellitus.

To conclude, the various metabolic, inflammatory, and autoimmune components including the obesity-related cytokines and oxidative stress markers in relation to the pathogenesis of PCOS highlight the multifaceted nature of the disorder and the need for further research into the subject to better delineate the contribution of each of these markers and mediators in the final expression of PCOS.