Dr. MC Gupta answers a question, pertinent to the medical community, as to why dentists cannot be termed as doctors, as per law. 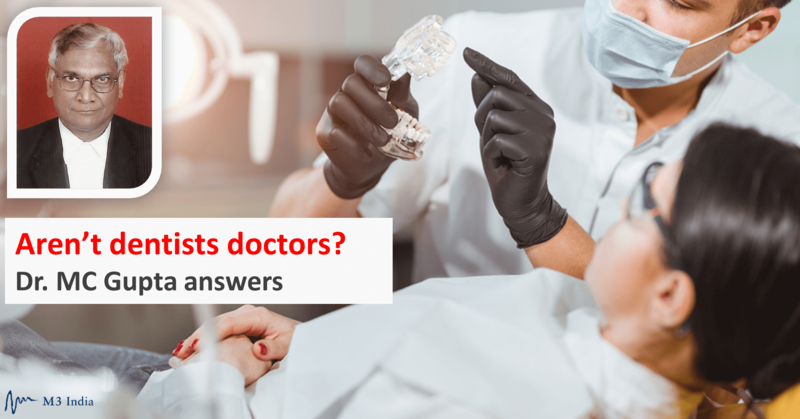 ANSWER-- No. Dentists are not doctors for the following reasons:

i)—They do not have a degree in medicine. An MBBS, who has the degree of “Bachelor of Medicine”, has, in addition, a degree in surgery / general surgery (the degree of “Bachelor of Surgery”. A dentist does not have a degree either in general medicine or general surgery. His limited scope of work is in dental surgery. That is why he is referred as a dentist, not as a doctor, in the Dentists Act, 1948.

v)—If they were doctors, the insurance companies offering indemnity insurance would not distinguish them from doctors.

vi)—If a dentist practices medicine as a doctor, he would be held guilty of negligence in accordance with the judgment in Poonam Verma case [Poonam Verma Vs. Ashwin Patel and Others, reported as 1996 AIR 2111, 1996 SCC (4) 332], where the Supreme Court held as follows:

Negligence per se: Conduct, whether of action or omission, which may be declared and treated as negligence without any argument or proof as to the particular surrounding circumstances, either because it is in violation of a statute or valid municipal ordinance, or because it is so palpably opposed to the dictates of common prudence that it can be said without hesitation or doubt that no careful person would have been guilty of it. As a general rule, the violation of a public duty, enjoined by law for the protection of person or property, so constitutes".

41. A person who does not have knowledge of a particular System of Medicine but practices in that System is a quack and a mere pretender to medical knowledge or skill, or to put it differently, a charlatan.

42. Where a person is guilty of negligence per se, no further proof is needed……….”

The writer, Dr. MC Gupta is a practising lawyer specialising in medical negligence cases. He also has an MD Medicine from AIIMS, Delhi where he also worked as a faculty member for 18 years, later working another 10 years as a Professor and Dean at National Institute of Health and Family Welfare, New Delhi, before pursuing law.