Imaging plays a crucial role in identifying breast cancers at a very early stage by means of screening, characterising small tumours in the breast, guiding biopsy of the breast lesion and the axillary lymph nodes thus contributing to staging of the disease thereby providing for choosing an appropriate treatment modality. 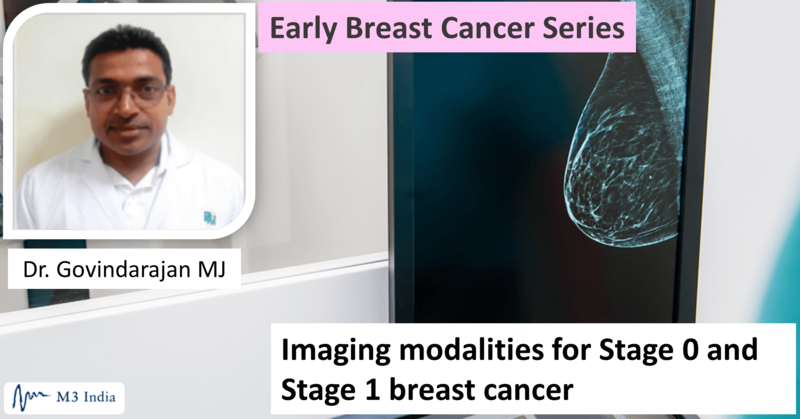 Early breast cancers are often detected during screening of breasts which otherwise are not demonstrating lumps or any other signs of tumour on clinical examination. Consequently, these are small tumours with no spread to other structures although not all small tumors can be said to be early cancers as a small percentage of tiny primary breast cancers present clinically or radiologically with metastases.

Stage 0 (ductal carcinoma in situ - DCIS, lobular carcinoma in situ - LCIS and Paget disease of the breast with no tumour) and stage 1 (tumours of size between 1 mm and 20 mm) tumours of the breast with no evidence of spread are considered early breast cancers. Upto 11% of predetermined DCIS on imaging may have an invasive component at the time of biopsy and about a fourth of all DCISs diagnosed on core biopsy may demonstrate invasive ductal carcinoma following surgical excision.

Mammographically, DCIS can be seen as casting type of microcalcifications (50 to 70%) or a soft tissue density (20 to 25%) with or without microcalcifications though rarely it can be seen as an asymmetric density (8%); important point to remember is that not all DCISs calcify and hence mammographic distribution of calcifications underestimates the extent of DCIS. 3D tomosynthesis has a better rate of detection of these lesions by eliminating the masking effect limitation of the 2D FFDM.

A hypoechoic mass with microlobulations and ductal extension with no significant distal acoustic shadowing is the most common feature of a sonographically detected DCIS. It should be understood that not all mammographically detected DCISs can be identified by ultrasound and hence ultrasound is almost always used in conjunction with mammography during the initial evaluation.

These are small tumours between 0.1 and 2.0 cm in size, which are often seen as spiculated focal densities on mammography/3D tomosynthesis with architectural distortion with or without calcifications; ultrasound also demonstrates a similar heterogenous/hypoechoic lesion with spiculated margins and distal acoustic shadowing; elastography demonstrates a hard lesion with the ratio of elastography image to grey scale image being more than 1, suggesting tumour infiltration beyond the morphologically visible margins. MRI typically demonstrates a small spiculated enhancing mass demonstrating restricted diffusion on DWI and an early enhancement with wash off on the time intensity curve.

Apart from detecting and characterising the primary breast tumour thereby guiding biopsy/intervention, a high resolution ultrasound is often used for assessing the axillary lymph nodes in early breast cancer patients. A lymph node in the ipsilateral axilla is considered to be suspicious for harbouring malignant cells from the breast cancer if any one or more of the following features are seen:

Lymph node size criterion is less reliable than the morphological criteria. A well-performed ultrasound examination of the axillary lymph node has a positive predictive value of more than 80% though the negative predictive value is disappointing (about 60%); accuracy is around 67% with sensitivity and specificity being about 54% and 85% respectively. The efficiency of the ultrasound increases significantly with addition of the ultrasound guided biopsy of the lymph node.

Any cancer patient needs to be assessed for distant metastases although incidence distant metastases in patients with early breast cancer without particular symptoms is so uncommon that a metastatic survey is generally not included in the cancer management guidelines. However, a minority of patients harbour silent distant metastases and can be identified by appropriate modalities like bone scan, contrast enhanced CT scan of abdomen and HRCT lungs; use of F18 FDG PET CT scan, though not of great help in early breast cancer patients, is being often used by oncologists based on risk category of patients, receptor status of the tumours and rarely to convince the patients about the absence of metastases.

This article is part of a early breast cancer management series. To read the other articles, click below.

'Radiotherapy in early breast cancer: How much is too much?'- Dr. Bindu Venugopal

The author, Dr. Govindarajan MJ is an Interventional Radiologist and the Head of Oncoimaging at a prominent Bengaluru hospital.