Dr. Sundeep Mishra offers his expert commentary on the late breaking results from DAPA HF trial which sought to investigate whether dapagliflozin would prove useful in treating patients with heart failure, even in the absence of diabetes. 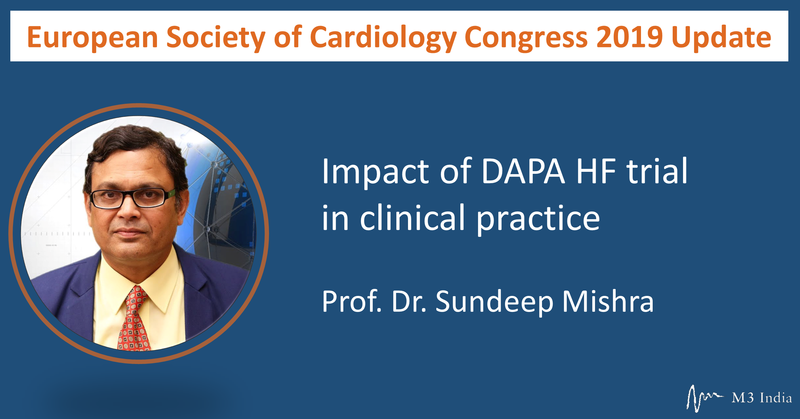 DAPA HF set out to prove (or disprove) just that. It enrolled 4,744 adults in 20 countries, of HFrEF (left ventricular EF 40%). NIDDM was present only in ½ of the patients (while half were non-diabetic). Enrolled patients had moderately elevated N-terminal pro-B-type natriuretic peptide and an estimated glomerular filtration rate of ≥ 30 mL/min/1.73. Patients were randomised to receive once-daily dapagliflozin 10 mg or matching placebo, in addition to standard care.

During a median follow-up > 18 months, the primary outcome of CVD death, HF hospitalisation or urgent HF visit was reduced by 26% in the group assigned to dapagliflozin compared vs. placebo (95% CI, 0.65-0.85). Dapagliflozin was associated with significantly improved individual outcomes as well; 17% reduction in all-cause death (95% CI, 0.71-0.97). The treatment effect was consistent across all 14 pre-specified subgroups including more interestingly, in those without diabetes, compared to those with diabetes.

Thus DAPA HF is a "landmark trial" because the magnitude of benefit seen with SGLT2 inhibitors (dapagliflozin) both for primary and secondary endpoints is similar to, if not larger than, those in recent major successful trials, such as SHIFT, EMPHASIS-HF, and PARADIGM-HF. Importantly, quality of life in DAPA HF was also similar, if not better.

The mechanism of action in heart failure is really unknown.

The impact of DAPA HF trial in clinical practice