Can you increase the body’s ‘good fat’?

Did you know that white fat isn’t the only fat? The body also has stores of brown fat, and the good news is, it is a “good” fat. Its primary function is to convert food into body heat when needed. 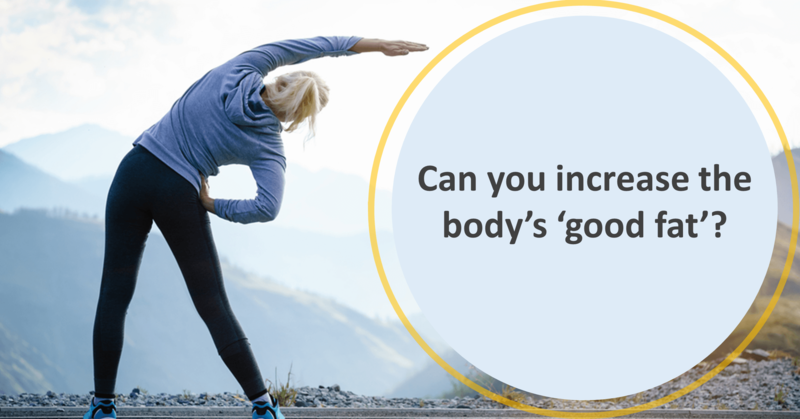 Differences between brown and white fat

Brown fat and white fat are both needed by the body for heat and insulation. But, they function very differently. Don’t judge white fat too harshly—it has a definitive purpose. White fat stores energy, insulates, and cushions the body in times of stress or when a fall is sustained. White fat is the body’s largest reservoir of energy, and is a result of excess calories the body has converted into fat as an energy reserve. It also secretes important hormones and immune-modulating signals that regulate the metabolism and immune system.

But, too much white fat can lead to increased risk of many diseases, including metabolic dysfunction, heart disease, type 2 diabetes, and even several types of cancer.

Brown fat, on the other hand, exists to convert food, or calories, into body heat when the body gets cold. When temperatures go down, brown fat kicks into action by producing heat (thermogenesis). And while doing so, it burns a lot more calories than white fat does (much like muscle).

Activation of brown fat may improve glucose homeostasis and insulin sensitivity, and play an important role in bone health and bone density. In addition, activation has also been shown to increase adiponectin in men and circulating irisin. Both are hormones that centenarians seem to have abundant quantities of.

Brown fat tends to exist primarily around the neck and shoulders, from the lower neck to just above the collarbone. White fat is subcutaneous and visceral.

Newborns and hibernating animals have large stores of brown adipose tissue. In newborns, brown fat makes up around 5% of their body weight and is found on the upper half of the spine and shoulders. These brown fat cells serve to protect them against hypothermia, which is a major cause of death in newborns. Their proportion of brown fat, however, gradually decreases with age.

What it’s made of

Because they perform different functions in the body, white fat and brown fat are made up of very different components.

Because it consumes more oxygen than white fat, brown fat also contains more capillaries, and has many unmyelinated nerves that provide fat cells with sympathetic stimulation. Its primary function is to produce heat, and it is activated when the body cools down.

While many individuals focus on reducing their levels of body fat, it’s important to understand that not all fat is bad for you, and that both white fat and brown fat serve very specific purposes in the body.

According to a review, brown fat may help control serum glucose levels and improve insulin levels, and thereby decrease the risk for type 2 diabetes. Results also showed that brown fat may aid in the removal of fats from the bloodstream, thus decreasing the risk for hyperlipidemia. In another study, researchers found that brown fat showed promise in treating obesity.

Results from the latter study demonstrated that more brown fat in mice serves to increase the rate they burn energy, reduce the amount of fat on their bodies, and—importantly—protect them from obesity. Other researchers identified a signaling pathway that would initiate the conversion of white fat cells to brown fat cells. But, more research is needed.

Everyone has stores of brown fat, some more than others. Constitutive brown fat is what you are born with, but there is also a type of brown fat known as “recruitable.” It is found in the muscles and white fat throughout the body.

Some drugs can cause white fat to turn to brown fat, such as thiazolidinediones, used to treat insulin resistance. Their side effects, however, include weight gain and fluid retention.

The body will increase its own brown fat stores under specific conditions. If you would like to increase your brown fat, try to cool your body regularly. Researchers of the same review showed that only 2 hours of daily exposure to temperatures around 66° F could be enough to change recruitable fat to brown fat. Try to sleep in temperatures of 66° F or below. Or take cold showers or ice baths. Turn your home thermostat down. Spend time outside when the temperatures drop.

Besides exposure to cold temperatures, the means by which to increase brown fat levels in adults is not yet known. Researchers, however, are busy studying ways to turn white fat into brown fat. This may help with weight loss and perhaps even prevent weight gain.

It’s important to maintain a healthy diet and a healthy weight, and pay attention to the existence of brown fat. It may prove to be a formidable ally in the fight against obesity one day.