The idea that lowering your sodium intake can improve both your blood pressure and cardiovascular health has been well-documented. But recently, more and more studies are beginning to demonstrate that too little sodium may also be bad. 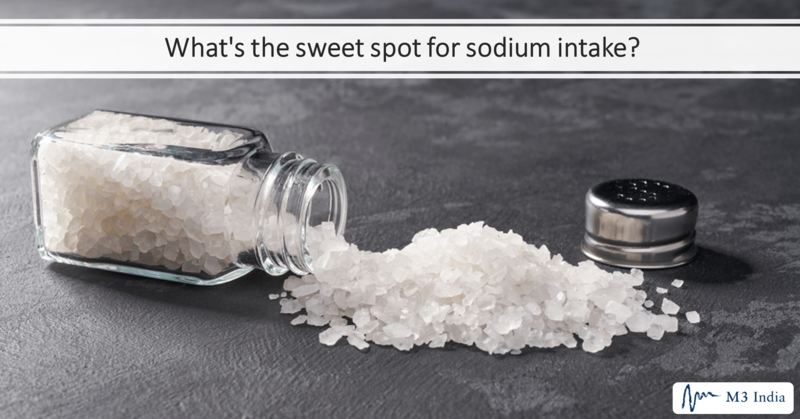 Let’s take a look at what this lowly mineral—an electrolyte like calcium, magnesium, phosphate, and potassium—does for your body.

Too much sodium (> 145 mEq/L) can adversely affect these fluid balances and thus contribute to high blood pressure. But, too little sodium (< 135 mEq/L) can have detrimental effects as well.

For optimal function, the body needs < 500 mg/d of sodium—less than a quarter of a teaspoon. The American Heart Association recommends a sodium intake of ≤ 2,300 mg/d (about 1 teaspoon), with 1,500 mg/d being ideal for adults. Yet, on average, Americans consume about 3,400 mg/d.

Albeit rare, the problem of getting too little sodium can have wide reaching effects on the body.

In the Prospective Urban & Rural Epidemiological (PURE) study—the largest international study to date on sodium and potassium intake and their effects on blood pressure, death, heart disease, and stroke— researchers found that consuming too little sodium is associated with some health risks.

“In the PURE study, we found the lowest risk of death and cardiovascular events in those who consumed moderate amounts of sodium intake (3 to 6 g per day), with an increased risk above and below that range. While this finding has been reported in previous smaller studies, PURE is the largest international study to study sodium intake and health outcomes and adds considerable strength to the contention that moderate sodium intake is optimal,” said lead author Martin O’Donnell, MB, MRCPI, PhD, associate clinical professor, Divisions of General Internal Medicine and Hematology and Thromboembolism, Department of Medicine, McMaster University, Hamilton, Ontario, Canada.

“Low sodium intake does reduce blood pressure modestly, compared to moderate (or average) intake, but low sodium intake also has other effects, including adverse elevations of certain hormones that are associated with an increase in risk of death and cardiovascular diseases. The key question is whether these competing physiologic effects result in net clinical benefit or not,” he added.

With these results in mind, here are some of the possible negative side effects of getting too little sodium in your diet:

Although these studies are far from definitive—indeed, many of them conflict with other studies—they are grounds for considering the possible drawbacks of a diet that includes too little salt. As with everything, moderation is key. Too much or too little salt can both have serious consequences on the body.