PCSK9 inhibitors, either alone or in combination with statins, have allowed dramatic reductions in LDL associated with further significant reduction in CV events. In this pre-webinar writeup, Dr. Jamshed J Dalal discusses 2 major trials that have proved the efficacy of PCSK9 inhibitors for aggressive management of ASCVD. 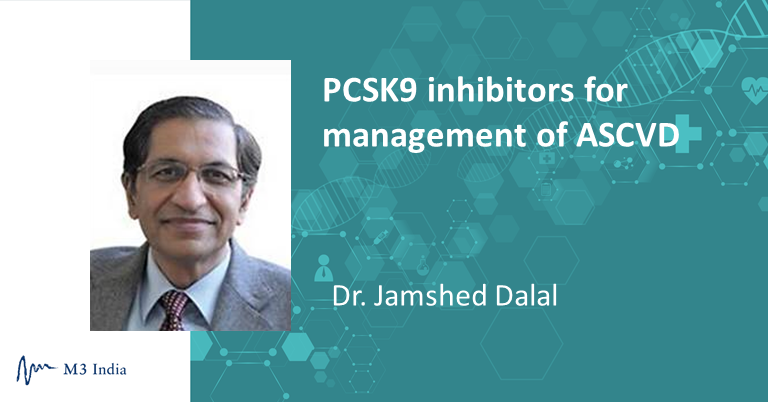 It is often overlooked that atherosclerosis is a systemic disease that results in development of plaques throughout the arterial system, and is the underlying pathological process common to Coronary Artery Disease (CAD), Peripheral Artery Disease (PAD) and Cerebrovascular/Carotid Artery Disease. Atherosclerosis and subsequent atherothrombosis is associated with a poor prognosis. It can significantly reduce life expectancy in a 60-year-old patient by 8-12 years depending on the vascular event.

Aggressive LDL lowering as the goal to reduce atherosclerosis

There is overwhelming data on the efficacy of statins to reduce CV outcomes and mortality. The primary mode of action is through reduction of LDL values. There is clear evidence to show that lower the LDL value, the greater the benefit. Statins however were unable to reduce LDL beyond a certain level. Some patients are also not able to tolerate statins and therefore need some other form of therapy to reduce LDL. Ezetamibe alone or in addition to statins is advisable in this group but the lowering of LDL and CV events is small, and not adequate in high-risk subgroups.

Monoclonal antibodies that inhibit pro-protein convertase subtilisin/kexin type 9 (PCSK9) have emerged as a new class of drugs that effectively lower LDL cholesterol levels. Genetic studies have shown that carriage of PCSK9 loss-of-function alleles is associated with lower LDL cholesterol levels and a reduced risk of myocardial infarction. The use of PCSK9 inhibitors, either alone or in combination with statins, has allowed dramatic reductions in LDL associated with further significant reduction in CV events.

Two major trials of PCSK9 inhibitors have been carried out showing consistent findings.

The randomised, double-blind, placebo-controlled trial involved 27,564 patients with atherosclerotic cardiovascular disease and LDL cholesterol levels of around 70 mg per deciliter or higher who were receiving statin therapy. Patients were randomly assigned to receive evolocumab (either 140 mg every 2 weeks or 420 mg monthly) or matching placebo as subcutaneous injections.

Findings of the trial:

It concluded that inhibition of PCSK9 with evolocumab on a background of statin therapy lowered LDL cholesterol levels to a median of 30 mg per deciliter and reduced the risk of CV events.

These findings show that patients with atherosclerotic cardiovascular disease benefit from lowering of LDL cholesterol levels below current targets.

There was a 22% reduction in the risk of the key secondary end point among the patients in the lowest quartile for baseline LDL cholesterol level, in which evolocumab lowered the median LDL cholesterol level from 73 mg per deciliter to 22 mg per deciliter, level that is well below current targets. These observations align well with the effects of evolocumab on coronary atherosclerotic plaque volume in the GLobal Assessment of plaque reGression with a PCSK9 antibOdy as measured by intraVascular ultrasound (GLAGOV) trial.

The translation of reductions in LDL cholesterol levels into cardiovascular clinical benefit requires time. Overall, 74 patients would need to be treated over a period of 2 years to prevent a cardiovascular death, myocardial infarction, or stroke. This shows the importance of early treatment and aggressive LDL lowering, early in the course of atherosclerosis rather than in the final stages of high-risk patients. In addition to the lowering of LDL, evolocumab reduces Lp(a), Apo B, and non HDL levels, while producing mild elevations in HDL. These would have obvious additional benefits.

Slots are filling up soon. Register by clicking here.

Learnings from the trials

If we are to stem the epidemic of cardiovascular disease in our country, we will need to be far more aggressive in the management of atherosclerosis and atherothrombosis. To reduce atherosclerotic progression, and to reduce further CV events in patients with CVD and at high risk of future events, PCSK9 inhibitors can be used very safely, and without the anxiety of increased diabetes or muscle pains, seen with statins.

These benefits are not just related to coronary but also to cerebral and peripheral vascular disease. Patient and physician education is important to fully understand the risks and benefits that ensue from a very aggressive approach to this highly prevalent disease associated with a high morbidity and mortality.

The author, Dr. Jamshed J Dalal is the Director of Cardiac Sciences at a Mumbai hospital.