There is a general apprehension regarding prescription of beta-blockers to COPD patients with or without the existence of heart disease, largely due to fear of bronchospasms and severe exacerbations. Prof. Dr. Sundeep Mishra in this article, deliberates on this question and gives his expert take on the subject.

But, before you read what Prof. Dr. Mishra has to say, we would like to know what your opinion as a health expert is. 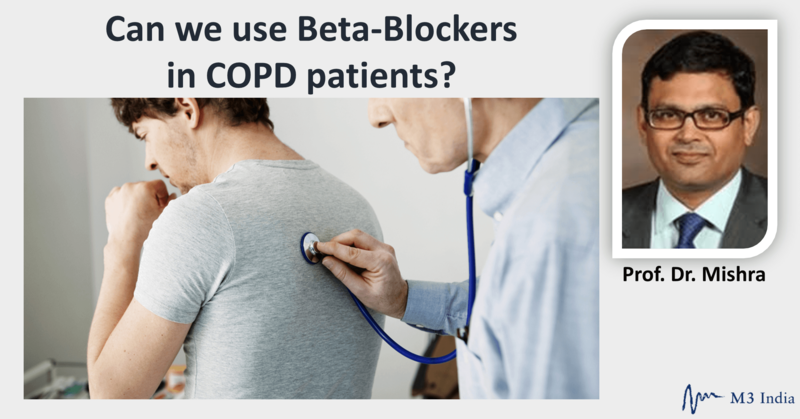 Chronic obstructive pulmonary disease (COPD) is the third leading cause of death currently and is increasing in importance by the day. Currently, there is a general reluctance to give Beta-Blockers (BB) to patients with COPD due to the fear of inducing adverse reactions and bronchspasm.

As a matter of fact, the use of BB is considered a contraindication by an average physician based mainly on the assumption of worsening of respiratory symptoms or forced expiratory volume in 1 second (FEV1) and on anecdotal evidence and case reports citing acute bronchospasm following the administration of BBs. On the other hand BB can have many potential beneficial effects in patients with COPD, such as reducing systemic inflammation, the number of goblet cells, and mucous release.

Moreover, BBs may have a profound effect on morbidity and mortality in some patients of cardiovascular diseases (CVD), particularly in context of myocardial infarction and heart failure which happens to be common in patients with COPD. BBs are well tolerated by the large majority of patients with heart failure, even in those with co-morbid conditions such as diabetes mellitus, COPD, and peripheral vascular disease.

Findings of studies of cardioselective BBs have revealed either no or relatively small decreases in the FEV1 with long-term treatment. As a matter of fact, most retrospective observational studies have suggested that such positive effects on morbidity (COPD exacerbation) and mortality occur in patients with COPD who have CVD.

Recently, the BLOCK COPD (Beta-Blockers for the Prevention of Acute Exacerbations of Chronic Obstructive Pulmonary Disease) trial, a prospective, randomised trial, in COPD patients without known cardiac disease was published in the New England Journal of Medicine which sought to investigate the impact of BB (extended-release metoprolol) on exacerbation of COPD.

Thus the BLOCK COPD trial does not provide any support for the use of beta-blockers in non-cardiac patients (who do not have a therapeutic indication for treatment with a BB) and who have severe COPD with a high risk of severe exacerbations in context of the prevention of an exacerbation of COPD.

Disclaimer- The views and opinions expressed in the article and videos are those of the speakers and do not necessarily reflect the official policy or position of M3 India.