Why do surgical super-specialty courses fail to attract doctors in the current times?

As many as 189 of the 2,029 seats for super-speciality surgical courses in India's medical colleges remained vacant this academic year. Here we delve deeper into the issue to understand what the reason could be. 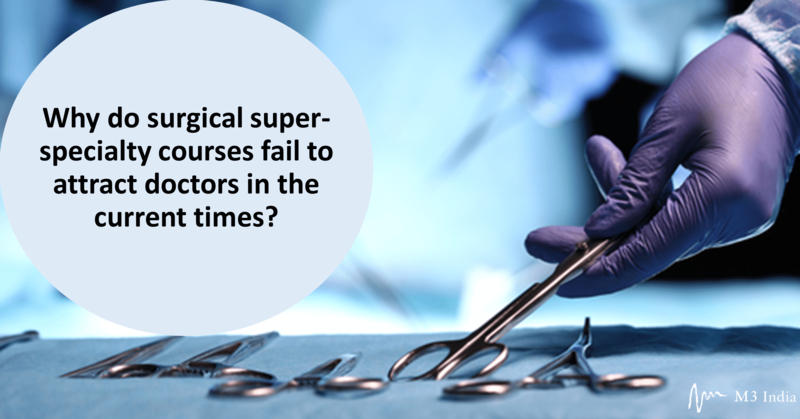 Of these, 168 seats were from four surgical disciplines: cardiothoracic & vascular surgery (CTVS), peadiatric surgery, plastic surgery and neurosurgery, as per the information provided on the website of National Eligibility-cum Entrance Test (NEET).

On September 11, the state government of Gujarat waived the five-year-old rule that required candidates to deposit Rs. 50 lakh if they wanted to study super-specialty courses- CTVS and paediatric surgery. Explaining the reason behind the decision, Dr. MF Shaikh, Director of Post-Graduate Studies and Research at BJ Medical College, Ahmedabad, told the media that the college was not getting any students for these two courses since this rule was introduced. He said, he hoped students will begin applying now that they don't need to submit the hefty bond.

BJ Medical College and Civil Hospital is Gujarat’s only hospital where paediatric surgery is available. Patients from neighbouring states also visit the hospital. Doctors are wary that a lack of super-specialists might not bode well

A senior obstetrician who did not wish to be identified expressed grave concern at the lack of specialist surgeons. He said: "They build swanky complexes and new hospitals. But are they bringing in robots to treat patients? What's the use of a super-specialty hospital that has no specialists?"

The Gujarat government's resolution that revoked the Rs. 50 lakh bond also acknowledged fear. It states: “If students do not take admission in these super specialty courses, patients cannot be offered medical services.”

At the same time, the Government Resolution (GR) sought to explain the other reason these seats had been going vacant. It cited technological advancements in cardiology services as a reason behind drop in the need for CTVS survey. In case of paediatric surgeries, the GR reasoned that surgeries that were conducted for impairments by birth are now easily detected with the advanced 3D and 4D sonography tests before delivery itself, so congenital impairments are on a decline, at least among affluent families.

“Due to these reasons, it is of least priority to students nowadays to take admission in cardio-thoracic vascular surgery and paediatric surgery courses,” the GR stated.

Not all doctors are alarmed at the seats going vacant. “A few subjects like cardiac surgery have lesser demand now and that is because of the dynamics of healthcare practice. These subjects were also not very popular in the past but the seats were getting filled because of the smaller number of total seats available. Now that the number of the super-specialisation seats have increased manifold, many seats in such departments are lying vacant,” explained Dr. Manas Ranjan Pradhan, Senior Urologist and Kidney Transplant Surgeon, Kalinga Hospital, Bhubaneswar.

He, however, added that this scenario can’t be extrapolated to all the branches of super-specialisation.

Requesting anonymity, another doctor who is studying neurology in the government-run Thanjavur Medical College said: “People who are interested to pursue specialty course will definitely take it up no matter what. But come to think of it, all states can have a unified NEET exam but not the same salary and stipend. There are no facilities for us to stay with family and make a living with such a meagre stipend. And the fall in demand of specialty courses is not a new trend. It’s been happening for years. It has come to limelight because of NEET. And when they abolished state quota for the past two years, at least that could be an important reason for decline in Tamil Nadu.”

The author Sonali Desai is a Mumbai-based freelance writer and a member of 101Reporters, a pan-India network of grassroots reporters.