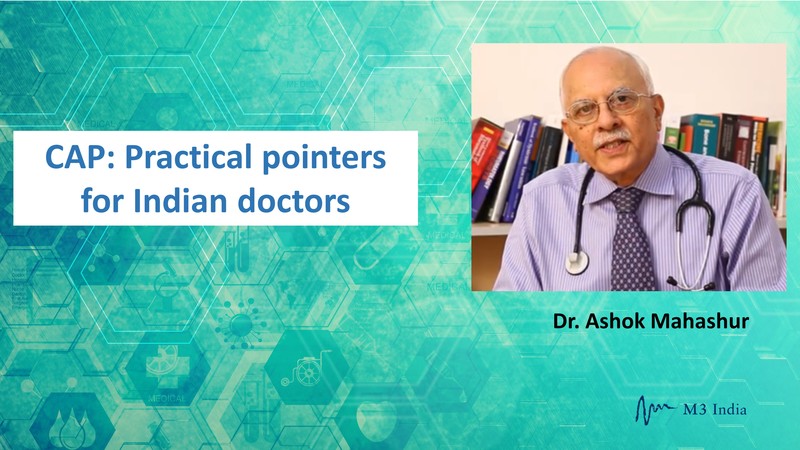 Community Acquired Pneumonia (CAP) is a potential concern globally due to significant morbidity and mortality associated with the disease especially at extremes of ages. Pneumonia is consequence of an infectious process resulting from the invasion and overgrowth of pathogenic microorganism in the lung parenchyma and breaking down of local defence mechanisms leading to production of intra-alveolar exudates. [1]

CAP is the pneumonia which one acquires from the community. Severity is decided by an interplay between pathogen-related factors (e.g. virulence and inoculum size) and host-related factors (e.g. sex, age and comorbidities). Although, CAP-related mortality has shown a declining trend over time in the general population, [2] rates remain as high as 35% in patients with severe forms of CAP, requiring intensive care unit (ICU) care. [3]

Statistics vary all over the world. In the Asian population, a multicentre study [4] showed that the annual incidence for adult community-onset pneumonia (including CAP and healthcare-associated pneumonia) was estimated at 16.9 cases per 1,000 persons per year, higher in men than in women for all age groups (15.6 vs. 9.3 per 1,000 persons per year). Reason for this rise in pneumonia can be due to the increased life expectancy with medical advancement and growing use of immunosuppressive agents. An Official Clinical Practice Guideline of the American Thoracic Society (ATS) and Infectious Diseases Society of America (IDSA) came out recently in 2019, outlining management of CAP. [5]

A WHO global burden of disease study revealed that lower respiratory tract illness which includes CAP contributed to 429.2 million episodes of illnesses worldwide and accounted for 94.5 million Disability -Adjusted Life Years (DALYs). [6] India accounts for 23% of global burden for CAP and 36% of regional burden for WHO. [7] In India, incidence of CAP was found to be 4 million cases per year and 20% of them warranted hospital admissions. Mortality rate in outpatient settings was 1 to 5% and in intensive care units was as high as 25%. [8]

Old age has emerged as an important risk factor for CAP all across the world. Underlying comorbidities in the form of Diabetes Mellitus, Chronic Obstructive Pulmonary Disease (COPD), renal failure, and congestive heart failure, further increase the risk for CAP. Both these factors i.e. old age and underlying comorbidities may help to predict the possible causative pathogens. [7] Smoking and alcohol overuse are also accepted as risk factors for CAP.

Worldwide, the most common microorganism causing CAP has been Streptococcus pneumoniae followed by Haemophilus influenzae, Mycoplasma pneumoniae, Staphylococcus aureus, Legionella species, Chlamydia pneumoniae, and Moraxella catarrhalis. Some variation in epidemiology may be seen as per climate, humidity, age and immune status of host. Similar trend is noted in India as well.

Patients typically present with cough with or without expectoration, breathlessness and pleuritic chest pain. A majority of patients have accompanied fever. Other constitutional symptoms like malaise, chills, fatigue and anorexia are also common. Commonly elicited signs are increased rate and work of breathing. On auscultation, rales or crackles can be heard.

Special sounds associated with pneumonia are whispering pectoriloquy, egophony etc. Signs of hypoxemia can be evident depending upon extent of gas exchange abnormality. Severe grade of CAP is a major concern as defined in figure 1. In severe CAP, due to intense systemic inflammatory response all over, high ESR, C-reactive protein, ventilatory embarrassment requiring support, hypotension, altered sensorium and organ dysfunction can be seen.

Atypical presentation may be seen in elderly and immunocompromised population. Thus, a high index of suspicion and lower threshold for basic and advanced investigations should be kept, due to increased morbidity and mortality in this subgroup. 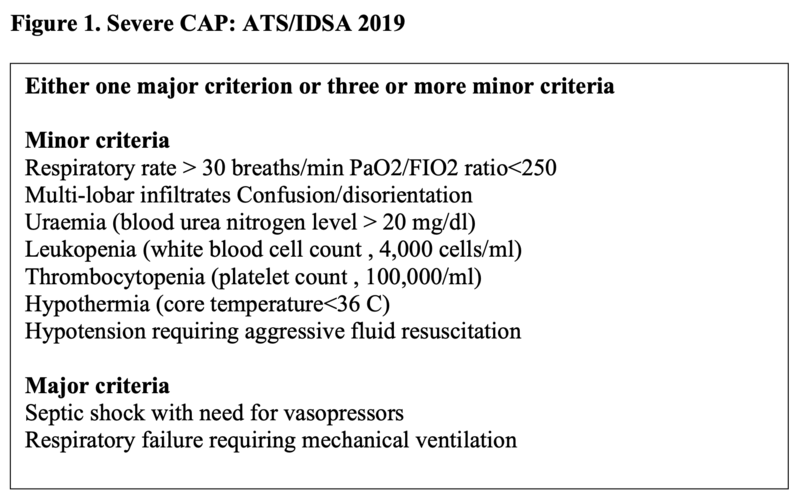 Diagnosis of CAP is done with an opacity on chest X-ray and a clinical prodrome as mentioned above. For clinically stable patients, a basic chest X-ray is enough for diagnosis and initiation of empirical treatment. There are many supportive investigations which can be done as per the clinical scenario like complete blood counts, C-reactive protein, procalcitonin, sputum evaluation with gram stain and aerobic culture, CT scan etc. Decision for these tests depends upon the severity of illness and overall clinical scenario (Figure 2). When influenza viruses are circulating in the community, respiratory sample should be tested for influenza virus with a rapid influenza molecular assay (i.e., influenza nucleic acid amplification test), which should be preferred over a rapid influenza diagnostic test (i.e., antigen test). 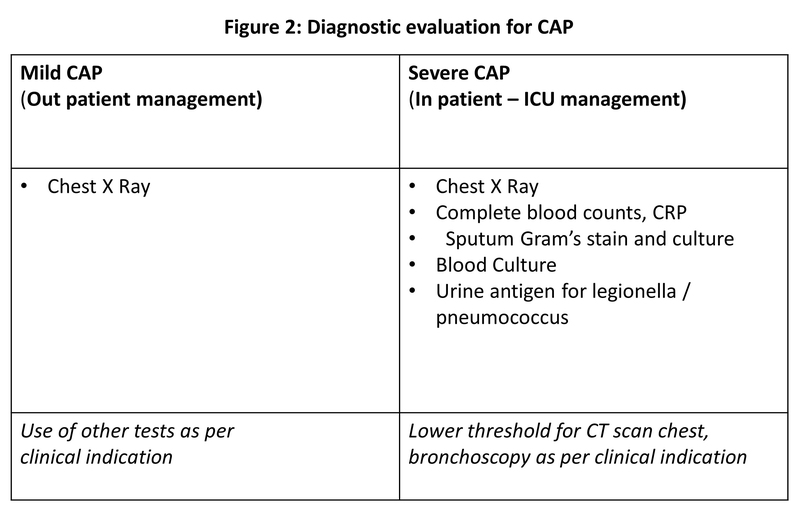 Additionally, pre-treatment sputum should be checked in those patients who are being empirically treated for methicillin-resistant Staphylococcus aureus (MRSA) or Pseudomonas aeruginosa, those who had a history of being infected and treated for MRSA or Pseudomonas aeruginosa or have a risk for multi-drug resistant pathogens like recent hospitalisation and administration of parenteral antibiotics within 90 days. Sputum for AFB stain and culture should be sent in selected subsets as per clinical suspicion who fulfil criteria for presumptive pulmonary tuberculosis.

Blood culture should not be dispensed routinely in all patients diagnosed with CAP. As per recent guidelines, blood culture should be sent in selected scenarios such as in severe CAP, those on empirical treatment for MRSA or Pseudomonas aeruginosa, previously infected with MRSA or Pseudomonas aeruginosa or with a history of hospitalisation requiring parenteral antibiotics within 90 days. These are the patients who have chances of rapid worsening with more severe form of illness.

Urine antigen for Legionella and Pneumococcus

Urine antigen for Legionella and Pneumococcus should not be sent routinely in all patients. They should be sent in cases where indicated by epidemiological factors such as association with a Legionella outbreak or recent travel and in patients with severe CAP . IDSA/ATS indications were found to have 61% sensitivity (95% confidence interval [CI] 49-71%) and 39% specificity (95% CI 37-41%) for Streptococcus pneumoniae, and 63% sensitivity (95% CI 44-79%) and 35% specificity (95% CI 33-37%) for Legionella pneumophila related CAP. Thus, this tool still struggles with poor sensitivity and poorer specificity.

In immunocompromised patients, CT scan should be done if strong clinical suspicion exists as chest X ray might not be enough in this subset due to poor ability to mount an immune reaction. Also, in some patients where pneumonia eventually doesn’t show signs of improvement despite appropriate therapy, CT scan can be done to identify complications or to rule out alternative diagnosis.

Treatmentof CAP depends on epidemiology, severity of illness and host factors (immunocompromised state, recent exposure to antibiotics etc), as majority of times we need to start the treatment empirically. Thus, a sound knowledge of prevalent pathogens is a must. For those with mild CAP without comorbid illnesses, limited pathogens are suspected and therefore a narrow spectrum antibiotic is advocated. On the contrary, those with severe CAP, need broader spectrum antibiotic upfront.

Management of CAP can be done either in ambulatory settings or in hospital settings. Pneumonia severity index (PSI) and CURB-65 are two tools which were devised for prognostication. [11,12] However, in the current scenario they serve in deciding whether the patient can be sent home on treatment or needs hospital care.

As per the latest guidelines, PSI is preferentially recommended over CURB-65 in conjunction with clinical judgement to decide the initial site of care. However, owing to its simplicity CURB-65 can be used alternatively for the same purpose. Hospital care should be mandatorily opted for patients with severe CAPas “mis-triage” leading to worsening in this subset has known to increase the mortality. [13]

Additionally, some patients may have medical and/or psychosocial contraindications to outpatient therapy, such as inability to maintain oral intake, history of substance abuse, cognitive impairment, severe comorbid illnesses, and impaired functional status, which should also be kept in mind.

For outpatient settings, empiric therapy would rely upon overall health and associated comorbidities of patients.

Management in the Indian setting

In the Indian scenario, monotherapy with respiratory fluroquinolones should be discouraged or rather avoided if there is any suspicion of pulmonary tuberculosis in the clinical presentation. Table 1 elaborates the treatment of CAP in outpatient settings, with drugs and dosages in different clinical situations.The duration of antibiotic therapy should be primarily guided by clinical response of the patient and should be continued for at least 5 days.

Table 1: Treatment of CAP in outpatient setting as per ATS/IDSA 2019

Table 2: Treatment of CAP In-Patient setting as per ATS/IDSA 2019

Corticosteroids should not be routinely administered in any form of CAP. However, in patients with severe CAP with refractory septic shock, corticosteroids should be given as per Surviving Sepsis Campaign recommendations. [15] No benefits have surfaced in patients with non-severe CAP rather hyperglycaemia, increased rates of re-hospitalisation [16] and complications in next 30 to 90 days have been a major concerns where steroids were administered. [17] Thus, large randomised controlled trials are needed to validate use to steroids.

If a patient with CAP tests positive with influenza virus, an antiviral should be initiated as soon as possible, preferably within 48 hours of initiation of respiratory symptoms for maximum benefits by heralding the progression of illness. Also, standard anti-bacterial regimen should be started alongside as bacterial co-infections are a common and serious complication of influenza infection.

Patients initiated on treatment begin to show signs of recovery in 48 to 72 hours. Antibiotic therapy should be continued for not less than 5 days. Follow up re-imaging is not routinely warranted if symptoms have settled in 5 to 7 days. Early and timely discharge is recommended as soon as the patient attains clinical stability to reduce complications related to prolonged hospital stay and to minimise economic burden.

Although, the majority of patients recover with the above mentioned regimens, there are some who struggle with clinical failure or non-resolving infection. Clinical failure can happen due to progression of initial bacterial infection despite all antibiotics, which may occur due to many reasons such as immunocompromised state leading to poor host response or due to rapidly spreading infection extending beyond lung parenchyma into plural spaces (empyema), cardiac valves (endocarditis), or blood stream (bacteraemia).

In some patients, clinical worsening is attributable to worsening of co-existing comorbid illnesses, especially cardiac complications like heart failure, pulmonary embolism or coronary artery disease or events like catheter-related blood stream infection or urinary tract infection in hospital, especially in the ICU.

In a scenario of non-resolving pneumonia, alternative diagnosis should be ruled out with further investigation like a CT scan chest. Furthermore, syn-pneumonic pleural effusion, spread to blood stream or cardiac valve, bronchial obstruction in underlying endobronchial malignancy, infection with pathogens like Mycobacterium tuberculosis, Histoplasma or rarer species like Nocardia which may fail to resolve or show partial response to drugs should be considered.

As CAP contributes to overall morbidity and mortality in the country, preventive strategies should be stressed upon. Prevention of CAP includes smoking cessation in active smokers, vaccination for influenza in all, and pneumococcal vaccine in at-risk population. [18,19] Figure 3 shows a simplified algorithm for management of CAP which should be followed in immunocompetent adults. 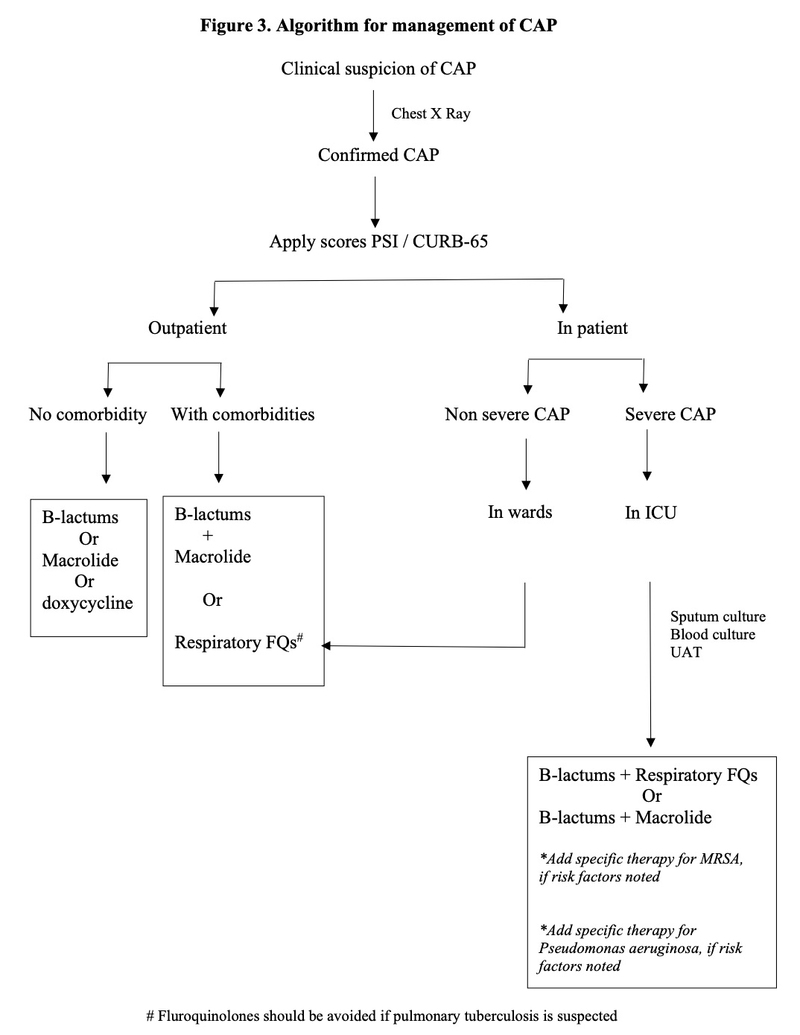