Menopausal Hormone Therapy (MHT) and the risk of breast cancer: The Lancet

A recent study reported in The Lancet, competently addresses the issue of menopausal hormone therapy (MHT) and the risk of breast cancer. This makes it necessary for clinicians to take a rational and comprehensive approach to the management of menopausal symptoms, with careful consideration of the risks and benefits of initiating MHT for each woman. 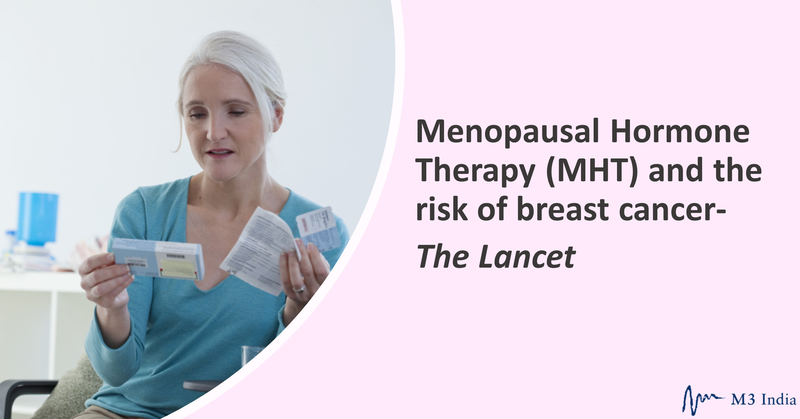 Physicians knew that users of menopausal hormone therapy (MHT) were at an increased risk of breast cancer. They till now had little information on the effects of different types of MHT or about how long the risks would persist after MHT use had ceased.

Researchers in an international collaboration project noted that during the follow up of 58 studies worldwide from Jan 1, 1992 to Jan 1, 2018, a statistically respectable number of 108,647 postmenopausal women who developed breast cancer at mean age 65 years; 55 575 (51%) had used MHT.

Among women with complete information, mean MHT duration was 10 years in current users and 7 years in past users, their mean age was 50 years at menopause and 50 years when they started MHT.

The Lancet journal reported the study on line on August 29, 2019. The study competently addresses the issue of menopausal hormone therapy and the risk of breast cancer for different types of MHT.

Generally, women start menopausal hormone therapy (MHT) when menopause starts. Their ovaries cease to function causing substantial fall of oestrogen levels; the progesterone levels virtually go down to zero. Some women experience serious hot flushes and striking discomfort. MHT can alleviate these symptoms. Although regulatory bodies in Europe and the USA recommend MHT be used for the shortest time that is needed, some clinical guidelines recommended less restrictive prescribing.

“In Western countries, MHT use increased rapidly during the 1990s, halved abruptly in the early 2000s, then stabilised during the 2010s. Currently, there are about 12 million users in Western countries – about six million in North America and six million in Europe (including one million in the UK). Although some are short-term users, about five years of use is now common, whereas about 10 years of use used to be common," a press release from The Lancet said

“Every MHT type, except vaginal oestrogens, was associated with excess breast cancer risks, which increased steadily with duration of use and were greater for oestrogen-progestagen than oestrogen-only preparations.” the researchers in the Lancet study observed.

They estimate that (reproduced verbatim): “For women with five years use of the three main types of MHT, starting at age 50, the 20-year breast cancer risks from ages 50 to 69 inclusive would increase from 6.3 per 100 in never-users to:

After ceasing MHT, some excess risk persists for more than 10 years - the size of this risk depended on the duration of previous use. If a woman had used MHT for less than a year, however, there was little excess risk thereafter.

“This excess would be greater in lean women, but in obese women, oestrogen- only MHT is associated with little excess risk. For 10 years of use, the 20-year increases in incidence would be about twice as great as for 5 years of use.” the researchers clarified.

Professor Valerie Beral from the University of Oxford, UK, a co author in the study says: "Our new findings indicate that some increased risk persists even after stopping use of menopausal hormone therapy. Previous estimates of risks associated with use of menopausal hormone therapy are approximately doubled by the inclusion of the persistent risk after use of the hormones ceases."

Dr Samantha Oakes the head of the Cancer Cell Survival group at the Garvan Institute of Medical Research, Darlington, Australia briefly stated the take home message from this study, thus:

“Overall, the study suggests that MHT, which is a very effective treatment for the symptoms of menopause, should be prescribed carefully and with regard to an individual patient's situation, taking into account the benefits and risks of such a therapy. Certainly the study suggests that MHT should be limited to five years of use or shorter if the symptoms of menopause subside."

“Perhaps breast cancer worry has deprived millions of women of an effective remedy for some of the symptoms of menopause. It is important to know the cancer risks with accuracy if women are suffering the consequences of avoiding MHT, and possibly, raising the risk of osteoporosis and other conditions, such as cardiovascular health or cognitive decline.

Clinicians must heed the message of this study but also to take a rational and comprehensive approach to the management of menopausal symptoms, with careful consideration of the risks and benefits of initiating MHT for each woman. This might be dependent on severity of the symptoms, contraindications for MHT (i.e., breast cancer, cardiovascular disease, and stroke), and BMI, and could take into account patient preference. For likely candidates, MHT (preferably oestrogen alone) should be initiated around the time of natural menopause and ideally limited to 5 years of use.”

“This is, in my view, a very careful, thorough, excellent piece of research. That’s hardly surprising, given the worldwide extent of the collaboration that produced it, and the many years that several of the leading researchers have spent examining these issues. The overall finding, that using menopausal hormone therapy (MHT), except vaginal oestrogens, is associated with an increased risk of breast cancer, isn’t new, but what is new is the extensive detail on many aspects of this association, in quantifying how any increase in risk depends on the type of MHT, the length of time for which a woman used MHT, and the length of time since she stopped. “

“Women and doctors should be reassured that the findings of this study do not add anything new in terms of the effects of hormone replacement therapy. Research shows that, for most women, HRT helps to manage menopausal symptoms and is safe.”, Prof Janice Rymer, Consultant Gynaecologist and Vice President of the Royal College of Obstetricians and Gynaecologists, stated in the press release from Science Media Centre, UK,

“Women must be informed of the small increase in risk of breast cancer so they can weigh these up against the benefits that they may have from taking HRT. Every woman experiences the menopause differently and symptoms vary. These can be extremely debilitating and have a significant impact on a woman’s physical and psychological health, career, social life and relationships. Unfortunately, many women are still suffering in silence and are reluctant to seek advice and support due to concerns around the risks of breast cancer associated with HRT.”, she clarified

“These findings should not put women off taking HRT if the benefits – such as protection of bones and decrease in cardiovascular risk – outweigh the risks.” She cautioned.

Status of women in India

A pan-India survey by the Indian Menopause Society (IMS) based on the data collected from 21 cities and 26 doctors all over India showed that the average age of menopause of an Indian woman is 46.2 years much less than that of their Western counterparts (51 years). The Hindu (June 27, 2016) reported the results of a survey by the Institute of Social and Economic Change (ISEC) that nearly 4% of Indian women experience menopause between 29 and 34 years of age.

“The figure goes up to 8% in the case of women between 35 and 39 years of age.”(The Hindu June 27, 2016) These sections of the population are at the peak of their career. If appropriate counselling is not provided this will have devastating social consequences.

In the very informative website of the Indian Menopause Society, a presentation on case studies reveals the complexities of counselling menopausal women. The Lancet study which arrives at the quantitative risk estimates for breast cancer for different types of MHT may be very useful for such organizations.

Dr. K S Parthasarathy is a freelance science journalist and a former Secretary of the Atomic Energy Regulatory Board. He is available at ksparth@yahoo.co.uk