A cheap polypill that combines - two commonly used blood pressure lowering drugs, a cholesterol-lowering medicine, and aspirin— taken once daily reduced the risk of major cardiovascular events such as heart attacks, strokes and sudden deaths in people by a third over five years, a recent paper published in The Lancet online concluded. 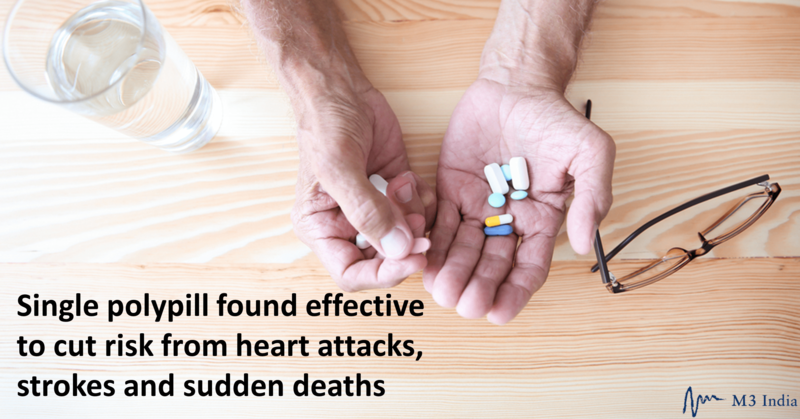 It "might substantially reduce the burden of cardiovascular disease (CVD) if adopted widely, especially in low- and middle-income countries", a press release from the journal added.

This large five- year- randomised trial proved for the first time the effectiveness for both the primary and secondary prevention of CVD in the general population; the study showed that the benefits of widespread polypill use outweigh any known side effects.

The PolyIran study covered over 6,800 individuals from the Golestan Cohort—a study tracking the health of over 50,000 adults from Golestan, a province in Iran. Participants aged 50 years or more living in rural areas joined the study between February 2011, and April 2013.

Interestingly, patients who took the polypill as directed (at least 70% of the time) saw the strongest protective effect against future cardiovascular events—cutting their risk by more than half (57%) compared with those given lifestyle advice only (86/2,144 [4%] vs 301/3,417 [9%]). Nevertheless, the authors did not observe a corresponding improvement in blood pressure.

This study is unique as it is the first to have a sufficient sample size and follow-up time to assess the effect of the polypill on long-term fatal and non-fatal cardiovascular events in primary prevention.

The researchers stated that some specialists proposed to produce and promote polypill more than 15 years ago as an acceptable and cost-saving approach to reduce cardiovascular disease risk.

“The idea of the polypill has always been appealing, and now we know that a fixed-dose polypill can achieve clinical benefits in practice,” Professor Reza Malekzadeh from Tehran University of Medical Sciences in Iran who led the research clarified in the press release from the Journal.

“Because the risks of side-effects from the components are very low, and the potential benefits are very high, the polypill is very safe. In terms of risk reduction, we can see the people who benefit most are those with high adherence"

He cautioned that "the polypill is not an alternative to a healthy lifestyle and should be combined with physical activity, a healthy diet, and smoking cessation.”

Professor Tom Marshall from University of Birmingham in the UK , a coauthor of the paper informed that polypills are commercially available in many countries for secondary prevention, but this is the largest trial confirming the value of the polypill and showing it is effective in primary prevention,

“Because they have most to gain, the most efficient strategy would be to offer the polypill to those at highest risk of heart disease.” he suggested

Poor medication adherence is particularly common among cardiac patients. Some study suggests that around a third of patients stop taking their medication as early as 90 days after having a heart attack. Researchers proposed the polypill concept as a simpler, cost-saving approach to improve medication adherence and reduce the cardiovascular disease burden.

Patients forget to take medicines regularly. The issue is of more concern when they have to consume more drugs, say for reducing BP, reducing cholesterol, may be to take care of diabetes etc. Polypills come handy for them by reducing the number of drugs.Margarita Tartakvsky, Associate Editor; PSYCH CENTRAL has proposed practical methods to ensure that the patients remember their drug schedule

The press release from the journal noted that the evidence for the long-term effects of the polypill is lacking, particularly in primary prevention settings, and the polypill is still not widely used. .

The study suggests that we have to treat 35 individuals with the polypill to prevent one person from having a serious cardiovascular event. In participants with high adherence to treatment (who took the polypill as directed at least 70% of the time), the number needed to treat was 21.

The researchers did not design the study to look at mortality. We need more research, but the findings indicate that the polypill was not associated with a significant reduction in overall mortality.

Limitations of the study

The researchers accepted that the study had several limitations: they used only two fixed-dose combination pills, and different dosages of each drug or different combinations might improve efficacy; at the start of the study the enrolment team knew of the allocation of 48 villages (2115 participants), which could have affected the behaviour of the enrolling physicians—when these participants were excluded, the protective effect of the polypill was reduced to 22% (from 34%); the researchers carried out the study in a rural population in Iran, with a population largely of central Asian ethnicity, which could limit the generalisability of the findings to other countries.

In a linked Comment, Professor Anushka Patel from The George Institute for Global Health, Australia concluded that despite some limitations, this study makes a major contribution to the evidence-base for polypills in the prevention of CVD globally.

"The findings are particularly important for low- and middle-income countries where 80% of the global CVD burden resides and where, in general, even larger preventive treatment gaps exist than observed in this and other polypill trials" Professor Patel clarified

“Overall, this study reinforces the health benefits of even small reductions in blood pressure and cholesterol. However, I do not agree that aspirin should be used in the polypill. Instead, perhaps a more potent once-daily, long-acting blood pressure-lowering agent could provide more benefit to patients." Prof Kausik Ray, Chair in Public Health, Imperial College London, clarified in his statement to Science Media Centre, UK

"First, it is set in a low middle-income country, Iran, albeit within an existing population-based study, rather than in the general population, suggesting that the results are applicable to low-resource settings, where 80% of the global burden lies.

Third, it shows 80% adherence to the Polypill which is considerably higher than what we see in routine practice, even in a high-income setting like the UK with universal healthcare coverage."

The status of the polypill

Why polypill research is less popular and the pill's acceptance is low?

Dr. Richard Smith, former editor, the British Medical Journal noted, "There are multiple business, regulatory, manufacturing, and cultural blocks to the widespread use of the polypill. but one central one is the refusal of the World Health Organization (WHO) to allow the polypill onto the essential medicines list despite three applications in recent years"..

He listed the reasons thus (verbatim):

Dr. Smith conceded that "the rejections strike enthusiasts for the polypill as deeply unfair as polypills (fixed dose combinations) for HIV, TB, and malaria have all been allowed onto the list with what the cardiovascular polypill enthusiasts see as much less evidence".

Dr. Smith explained the clarification by Nicola Magrini, the secretary of the essential medicines list committee at the WHO, thus:

"The applications for the cardiovascular polypill had failed because there was no strategy to support its widespread adoption. Plus simply listing it without clear guidance of how it should be used and how it improves, the current approach of treating individual risk factors (high blood pressure, hyperlipidaemia, etc) could cause confusion. How would the polypill reach the people who needed it most? How would it have impact on a major scale? How would its use relate to current guidelines and programmes on treating individual risk factors with separate drugs?

In contrast, polypills for HIV, TB, and malaria had been admitted to the list because there were clear strategies showing the need and the programmes that would be used to get the polypills to the people who needed them. "

"The challenge to polypill enthusiasts is not to produce more evidence of polypills’ effectiveness or even cost effectiveness, but to develop and test a strategy of how polypills can be delivered to the people who need them the most with the full support of all stakeholders, including those like cardiologists who are currently skeptical. ..It’s unlikely that such an ambitious target can be achieved without widespread use of the polypill for cardiovascular disease," Dr Smith concluded.

Under the present conditions, the benefits from using polypills may not reach the needy for many decades.

Dr. K S Parthasarathy is a freelance science journalist and a former Secretary of the Atomic Energy Regulatory Board. He is available at ksparth@yahoo.co.uk