Medical Termination of Pregnancy (MTP) in our country is governed by an act and contravention of the act amounts to criminal offense against the state and is liable for punishment. Dr. Dilip Walke throws light on this critical area. 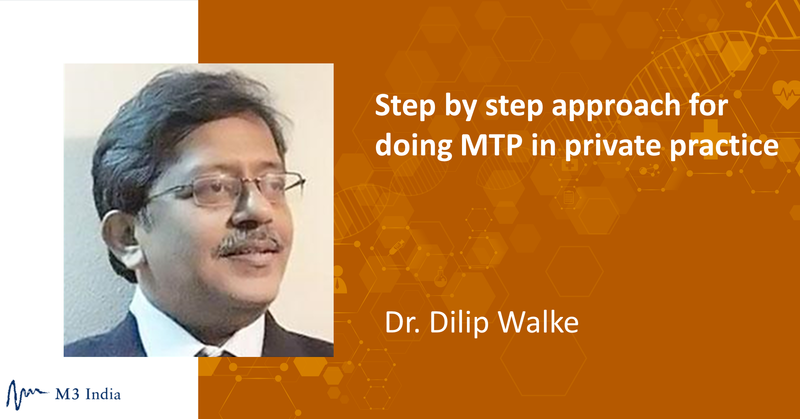 MTP is the most common and probably the first surgery that any Gynaecologist performs when he or she starts private practice. While the Gynaecologist may have fulfilled all the requirements to start his clinic or nursing home or hospital, it is very important that he fulfills the requirements of a legal MTP. The reason is that MTP in our country is governed by an act and contravention of the act amounts to criminal offense against the state and is liable for punishment.

This act no 34 was passed by Parliament on 10th August 1971 following the Rajya Sabha bill of 1969. The act was in response a movement by NGO’s against criminal abortion for which a committee (Shantilal Committee) was working from 1964. Since 1971 there have been two amendments in the act. The first was in 1975 and second was in 2002, which was published in the official gazette on 18th June 2003.

Described below is a step by step approach for doing MTP in private practice which is safe medicolegally and clinically.

A registered Medical Practitioner is one who has a medical qualification under Indian Medical Council Act no 102 of 1956, section 2 clause having his/her name in the State Medical Register.

Point no 2 : If one is an RMP under the MTP act, one can perform MTP with medicines in any clinic or consulting room provided the following is fulfilled:

Some medicolegal tips for MTP by medical method are:

Point no 3: If one is planning to start MTP by surgical method in his/her centre one has to apply for registration of the centre.

Following the 2002 amendment, the appropriate authority for registration has been decentralised (section 4). A district level 3 to 5-member committee is formed with the CMO or civil surgeon as the chairman having at least one female member and one FOGSI representative.

Application is made in form A. The appropriate authority on receiving the application inspects the centre within two months and sends recommendations to the committee. The committee finally approves or rejects the application in the next 2 months. Approval is given in form B in duplicate. One copy of form B has to be displayed visibly in the centre.

Point 4: Before the appropriate authority visits the center for inspection confirm that the centre fulfills all the requirements.

These are very simple and basic requirements which almost all nursing homes can easily fulfill.

Minimum requirements are as follows;

Presently MTP is not allowed beyond 20 weeks of pregnancy. However, in case we find a patient having a severe congenitally malformed foetus and is beyond 20 weeks, an application can be made for allowing termination of pregnancy in the respective high court. A 3-judge bench looks into the case and may refer to a committee in a medical college. In case the committee allows termination, the needful can be done. Several NGOs have now come forward to help these women in distress and they facilitate the court procedures free of charge.

Point no 6: Study all the documents that the centre receives upon getting registration.

Point no 7: Observe the following steps while performing any MTP

While taking consent in form C one has to remember that the consent is expected to be an informed consent, which means that a proper counseling about the procedure, its risks, benefits, and alternatives is done. If the patient is an adult (>18 years), her own consent is enough. Husband's consent is legally not required. If the patient's age is less than 18 years, a guardian’s consent is needed. One lacuna in form C is that Form C doesn't mention indication for MTP. So it is prudent to take a separate signature on another consent form designed by FOGSI.

Indications for MTP are mentioned in the form 1 or the doctors approval form which we have to fill before performing the MTP. The indications mentioned below have to be properly selected and ticked:

Some points which we need to remember about indications are;

Point no 8: One has to remember that MTP act recognises and protects the right to secrecy of the patient and hence her name has to be kept a secret even from her husband.

Once a patient comes for MTP, enter her name in the “admission register” and assign her a number. Such numbering should start afresh every year e.g 1/2010, 2/2020,3/2010 and so on. From now onwards her name cannot be entered in the indoor paper, OT register, or discharge card. She has to be addressed only by the number assigned in the admission register. Admission register has to be maintained for 5 years as a secret document. Special situations when this document needs to be shown are

Point no 9 : We are liable for punishment amounting to 2-7 yrs of imprisonment

Point no 10: There is a section in the act (section no 8) which protects us from medicolegal cases in MTP, but one has to read the section carefully.

“No suit or other legal proceeding shall lie against any registered medical practitioner for any damage caused or likely to be caused by anything which is done in good faith PROVIDED IT IS DONE UNDER THIS ACT”.

Surendra Chauhan vs. State of MP 2000